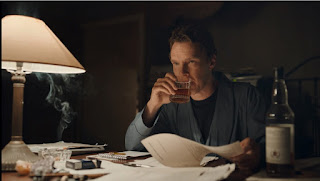 Patrick Melrose is based on the acclaimed semi-autobiographical novels by Edward St Aubyn. The new five-part drama from Sky Atlantic and SHOWTIME® skewers the upper class as it tracks its protagonist’s outrageous journey, from a deeply traumatic childhood through to adult substance abuse and, ultimately, towards recovery. The Patrick Melrose saga is subversive, savage and above all funny.

Each episode is devoted to one of the five Patrick Melrose novels. From abuse to addiction, episode one opens as the twenty something Patrick (Benedict Cumberbatch) flies to New York to collect his father’s ashes, and goes on to spend a drug-crazed 24 hours. Episode two, set in the South of France in the 60s, takes place in the family’s chateau where the sadistic and terrifying David Melrose (Hugo Weaving) dominates the lives of his son Patrick and his rich and unhappy American mother (Jennifer Jason Leigh). Episode three offers a sober and clean Patrick the possibility of recovery, and episode four shows the now-married Patrick as a father, struggling with child rearing, adultery and his mother's desire for assisted suicide. Finally, in episode five Patrick tries to solve the puzzle of his parents, and gropes towards tentative recovery.

This preview introduces us to Melrose and his harrowing yet hilarious journey, in a true television saga that sweeps through the South of France in the 60s, New York in the 80s and Britain in the early 2000s.


BAFTA Award nominee David Nicholls (Far from the Madding Crowd, One Day) has written all five episodes of the television adaptation. Director Edward Berger (Deutschland 83, Jack) has brilliantly recreated each era, with a unique visual style for each episode.

The series will be available in the UK and Ireland later this year.