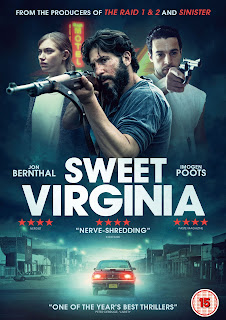 Steve Taylor-Bryant discovered a thriller with hidden depths as he watched Sweet Virginia...

There are times in this job where you get a screener from a publicity company and you wonder what the hell is wrong with the world and you get angry that pure and utter tosh is taking production money from something better. Then there are times like today, when Sweet Virginia lands on your desk and you realise that someone somewhere knows how to make a bloody great film. I’ll admit I was a little nervous going in, I’d only seen a picture on Jon Bernthal holding a rifle with blood splatter on his face and, of course, the press release mentions his stunning work in The Punisher, but don’t go into this movie thinking you are getting a Bernthal action flick, because you aren’t. You are getting a taut thriller, brilliantly written, expertly cast and directed by a man with a pure cinematic vision coursing through his veins in Jamie M. Dagg.

The synopsis reads “Former rodeo star Sam (Jon Bernthal) now lives a quiet small town life running a motel, where he begins a seemingly innocent friendship with Elwood (Christopher Abbott). Unbeknownst to Sam, the young man is responsible for the spate of violence that has recently gripped his hometown. As the community unravels, Sam’s loved ones, neighbours and business patrons become involved in the terror that unfolds, while Sam must face his past and present relationships to face off against this unpredictable predator” which screams violent action movie at me, but Sweet Virginia is far from that.

In Sam we see a Bernthal that has real acting ability. I like him in The Punisher and a couple of other projects he’s done but rarely does he play anyone that isn’t some degree of a thug. In this role there is an almost nervous humanity about him as he reacts to an illness that is affecting him physically due to many rodeo accidents. He is a man wanting the peaceful life, a man that has lost a child and just wants to love, and Bernthal is magnificent. I cannot recall the last time an actor took my breath away with a performance that I just didn’t see coming. There is also Imogen Poots, as Lila, in possibly one of her best ever outings which, when you consider her back catalogue, is quite the compliment and Rosemarie DeWitt as Bernadette is highly watchable as she struggles with the grief of her husband’s murder and her love for Sam. One of the smaller roles, Maggie played by Odessa Young, brings out such an emotional side from Bernthal in one scene, after a school sporting event, that left me with a lump in my throat and this is an actress I need to see more of. But we come to the scene stealer now. Christopher Abbott is not an actor I am that familiar with but, after his portrayal of Elwood, I’m wondering where he’s been all my life. There was very unnerving and natural evil in Elwood that played out in an excruciating and nail biting calmness that left me on the edge of my seat for the majority of Abbott’s scenes. Here is a man destined to be a star, that has an ability to portray so much of what his character is going through with just his face, and I can only hope that Abbott goes on to fulfil his obvious potential as an actor. A stunning performance in a very strong ensemble.

Which brings me to Jamie M. Dagg. I didn’t click right away but I had seen a previous film by Dagg, River, a couple of years ago, in which he told a tale very well and in a beautiful style that made the most of the landscape and the camera lens and, in Sweet Virginia, he has used both his location and obvious talent as a filmmaker to excellent effect. There are some stunning scenes of the town and its backdrop, some lovely solitary scenes of not much occurring that breaks up the tension in just the right places, and some camera POV’s, the ambulance driving away towards the end with the Virginia countryside in the background, that add a more classic, almost Hitchcock quality to an wholly original piece of film art. Often, when directors play with camera positioning in a movie that flows more classically, it can detract from the viewer’s experience, but Dagg manages to take some risks and every single one of them pays off. When you add in Brooke and Will Blair’s haunting soundtrack what you get is incredible, well crafted, extremely well cast, and incredibly visceral slice of cinema.