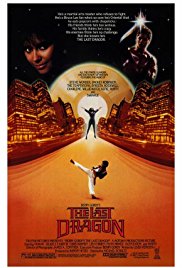 Our small band of Gunters here in The DreamCage universe are reviewing every film mentioned in Ernest Cline's Ready Player One. This week Susan Omand hunts The Last Dragon...

It turns out there aren’t any dragons in The Last Dragon.

What there is is a film that’s basically a Scott Pilgrim style rip off with added “martial arts” and Motown.

Set in New York City, the movie follows “Bruce” Leroy Green (Taimak) who has dreams of becoming a great martial artist like his idol Bruce Lee. His master (Thomas Ikeda) explains that he has reached the final level of martial arts accomplishment known as The Last Dragon. Those who reach this final level are said to be able to concentrate such mystical energy into their hands that they begin to glow. Only a true martial arts master would be able to exhibit The Glow over his entire body. Leroy doesn't fully understand and, in possession of a medal supposedly belonging to Bruce Lee, Leroy embarks upon a journey to find Master Sum Dum Goy, whom his master claims can help unlock the power of The Glow (kinda like Ready Brek then).

However, another martial artist gang leader-y type, Sho'nuff (Julius J. Carry III) the Shogun of Harlem, sees Leroy as a rival to his claim of martial arts superiority. Leroy refuses to fight him despite a lot of Sho’nuff antagonising, threatening and generally being an arse to him and his friends. That’s still not enough to provoke Leroy to fight so finally, Sho'nuff and his gang attempt to rile Leroy by destroying his family’s pizza restaurant and dumping his wee brother in the slops bin.

Meanwhile, video arcade mogul Eddie Arkadian (Chris Murney) sends his men to kidnap 7th Heaven video host Laura Charles (Vanity) in the hopes of getting his girlfriend Angela's (Faith Prince) new music video featured on her show but the first kidnap attempt is thwarted by the fleet footed Leroy. He loses his medal during the struggle, which Laura later finds and returns (which ends up being a random belt buckle). Later, Leroy witnesses Laura being kidnapped again by Arkadian's brutish henchman Rock (Mike Starr) properly this time. Laura refuses to promote Angela's video on her programme, but as Arkadian's men prepare to coerce her by force, Leroy suddenly bursts into the room and rescues Laura once again and she asks him to be her body guard, which he refuses.

Yeah ok, this was shite, but it was entertaining shite, I guess. The martial arts bit weren’t great (nowhere near Bruce Lee or Jackie Chan levels), the music wasn’t really my thing (no, not even DeBarge) and the story was very (and I mean VERRRRY) thin on the ground but the day was saved by the bad guys. Sho’nuff was so outlandish that he reminded me a lot of Lo Pan in Big Trouble in Little China (even though he looked more like Snoop Dogg in a cape) and Arkadian was as cartoonish a baddie as you could get with hapless henchmen, a blubby thing in a tank in his lair and a level madness that would rival the Joker, if the Joker was a camp video arcade mogul.

I’m sure if you cared to, you could dig below the surface and discover a lot of hidden morality and introspection in Leroy’s quest for inner mastery. Or you could just watch a pile of kids kick the shit out of a pile of bad guys at a disco. Either is fine.