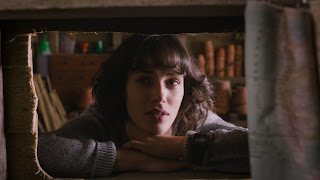 Susan Omand is in danger of running out of superlatives as she watched This Beautiful Fantastic, out on Digital Download on 5th March...

One of my all time favourite films is Big Fish (read my article on that here). There are two reasons for me telling you this. Firstly, having just watched This Beautiful Fantastic, that’s the film that it most reminds me of, even though it’s not really that similar on the surface. And secondly, both of these films are a reminder to keep trying things that you wouldn’t normally look at because there is always the chance you will find an unexpected gem.

Bella Brown (Jessica Brown Findlay) is a beautifully quirky young woman who dreams of writing and illustrating a successful children's book. Despite her abandonment as a child, the all consuming OCD, her unfulfilled dreams, her awful boss at the library and her paralysing fear of flora and fauna, Bella is down but not out. She has a spark, an edge, a talent and a voice that we can feel from the get go. This girl has an unearthly survival instinct, having been found in the middle of winter in the middle of Hyde Park as a baby. When Bella is forced by her landlord to deal with her neglected garden or face eviction, she meets her nemesis, match and mentor in Alfie Stephenson (Tom Wilkinson), a cantankerous, loveless, rich old man who lives next door and is an amazing horticulturalist and here the most unlikely of friendships begins.

Reading the synopsis above this really doesn’t sound like my type of film at all. It appears very “peoply heartwarmingy sugary nonsense” and I’m really not a heartwarmingy person – you may have noticed. To be honest, it’s only because Andrew Scott was in it that I wanted to try it; he doesn’t usually pick a bad project to be involved with. And I’m really pleased I did because there’s so much more to the film than the synopsis would suggest. I said at the start that it reminds me of Big Fish and it does. The tale, although simple and not unexpected, is beautifully and quirkily told. There are lots of tiny details, like the fact baby Bella was kept alive by the ducks at the park keeping her warm by sitting in the cardboard box she was left in, which give it the storybook quality that is essential to lift this film above the rest. And the synopsis hardly mentions the library at all! The performance by Anna Chancellor as the Librarian is a tour de force, with her stringent rules and her pegboard of terse messages. While we’re on the subject of the cast, there are more relationships to explore than just Bella and Mr Stephenson or Bella and the Librarian, and the different levels of human interaction are all very well written and the casting is incredible. Each character has their own idiosyncrasies, to put it mildly, even the supposedly down to earth house-keeper Vernon (Andrew Scott) and the dialogue is quite glorious with great flights of imagination and fancy.

The look of the film too, with hyper-organised cupboards, ticking clocks and psychedelic flower close-ups, has an almost Lynchian quality without the hidden sub-text – again it very much has that storybook feel. However the madness is never overdone, it’s always kept just this side of believable, like when someone regales you with a story of something that happened to someone they know and you know it’s been embellished but you let them tell it anyway because they make it larger than life and it makes you smile despite everything.

So that’s what This Beautiful Fantastic is – it’s a highly detailed, weird little storybook of a film that just makes you smile. Both very beautiful and utterly fantastical, watch it when you get the chance.