Film - What If: Casablanca 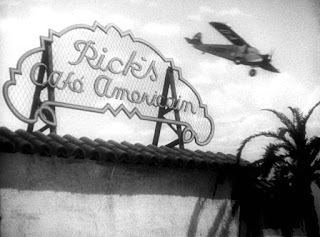 Of all the gin joints in all the towns in all the world, Susan Omand messes with this one. So what if she remade Casablanca...

I discovered the other day that the 1942 Humphrey Bogart classic Casablanca has been added as a free to watch film on Amazon Prime. This may not mean a lot to you but it is a huge deal for me as this is a film that has been very near the top of my favourites list since ever I can remember but I hadn't actually sat and watched it in about 30 years. So I settled down for an afternoon and hoped that it would stand up to the test of time.

I needn't have worried, it was every bit as good as I had remembered - a story of wartime adventure, intrigue and romantic sacrifice in a plot that is near perfect with a superb cast of characters that just make it everything you could hope for for a matinee movie and I watched the end credits roll with a sigh of utter satisfaction having cheered, jeered and sobbed my way through an hour and a half of brilliance.

However. It also got me thinking.

Brilliant as this film actually is, and even available for free, I get the feeling that Joe Public would no longer choose to watch a grainy black and white film from 65 years ago with nobody in it that they recognise (no, they probably won't even have heard of Humphrey Bogart as an actor these days - he's just a vehicle for a misquote). The actual story of Casablanca is as rip-roaring an adventure as any Indiana Jones film, even down to the travel map with lines on it, but it's being missed out on just because it's "old." Slowly it dawned on me that, shock horror, it might be time for a remake...

Watching the film again, with this in mind, there are 8 main characters that I'm going to look at but, before we get that far, we need a director. Unfortunately they don't make directors like Michael Curtiz any more. I know I said I wanted it to be a film kind of like Indiana Jones but I don't want it to BE Indiana Jones, so that rules out Spielberg. However that put me in mind of another Steven with Steven Soderbergh as I can really see the Ocean's Eleven caper style with the ensemble cast but, again, I think he could be a bit too heavy handed with it so I went with a maybe less well known but very talented director who has been involved with fascinating character films on both sides of the camera and am giving this to Scott Cooper.

So, to the characters. First in the spotlight is a very small part but memorably played in the original by Peter Lorre and pivotal to the plot, that of Ugarte – the thief who has stolen two much sought after “letters of transit” from some murdered German couriers in the first place. It needs someone with Lorre's disposition, brains rather than brawn and getting by on his wits, so, after seeing his performance in Neruda last year, I have plumped for Gael Garcia Bernal.

Next up is the owner of the “rival” gin joint, The Blue Parrot, and a major underworld player when it comes to selling black market papers. This needs to be someone who can believably hold their own in a bar fight and has the street smarts to get to the respected level that they are at on both sides of the law. I also wanted someone who could hide in plain site, blend in by standing out, so I went for Taraji P Henson.

Time for the main “bad guy” of the piece, the Gestapo commander Major Strasser who has been tracking the movements of the Czech resistance leader Victor Laszlo (who we shall come to shortly). For this we need someone with the look and the cold militaristic authority of a German Officer, and a good line in "streak of pure nastiness" roles, so I went with Alexander Skarsgard.

Speaking of Victor Laszlo, he's up next. Ilsa's husband has to be impassioned about his cause, driven, but who also commands authority and respect with a lot of charisma. My choice for the Czech resistance fighter is Armie Hammer.

Now we come to the “gang of four” in the film and the first of those is Ilsa Lund, the woman at the centre of the triangle with Laszlo and Rick. She isn't a frail damsel in distress though, she can get what she wants and she is strong enough to make her own decisions in life which, back in 1940s Hollywood, was quite a rare thing for a leading lady. Following in Ingrid Bergman's footsteps is Amy Adams.

Then comes Sam, the piano player. He's been working with Rick for a long time and they are friends as well as colleagues, escaping the invasion of Paris by the Germans and travelling south together to Casablanca. He is the voice of reason for Rick, and a confidante and, obviously, can also play the piano, so I went with Jamie Foxx.

Our penultimate player is really, for me, the main star of this film as he is everything to everyone when he needs to be, turning a blind eye to the goings on in Rick's cafe, as long as he can win at roulette, while presenting a loyal face to the Germans, it's the corrupt Vichy police Chief, Captain Renault. Again this has to be someone with the necessary authority to become police Captain but is also open to bending the rules for his own gain and persuadable to “do the right thing” when it matters. He also has to be the perfect foil for Rick and I've gone with Joaquin Phoenix.

Finally the main man himself, Rick, and anyone stepping into Humphrey Bogart's role has big shoes to fill, so it would work best with someone that doesn't try to be Bogart – not a classic hard man/thug type who does the strong and silent thing. However, it can't be a “pretty boy” actor either as Rick has been there, done that and been arrested for a lot of it as he is not welcome either in France or in his native US because of unstated misdemeanours. He does, however, have to have a lot of chemistry with both sexes and to be believable as a bar owner and gambling den operator. I've gone with someone that I didn't expect to for my leading man and that is Jeremy Renner.

Anyway, these are just my choices as I played with the idea. You can always let me know who your remake choices would be in the comments, if you'd actually let anyone remake it in the first place, and we can (cue the misquote) play it again, Sam... (sorry).

Watch the original film as this one won't ever get remade