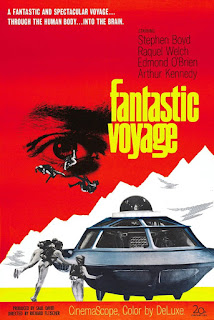 Our small band of Gunters here in The DreamCage universe are reviewing every film mentioned in Ernest Cline's Ready Player One. This week, Barnaby Eaton-Jones goes on a Fantastic Voyage...

Don’t you love those streamlined, one-piece, fitted, figure-hugging outfits, the expensive special effects, the of-its-time attitude to the sexes, the struggle inside the mind and body that creates the narrative, and the evil Scientist who is defeated by a dashing hero who goes on to greater fame in the TV series ‘Police Squad’ and its movie trilogy spin-off ‘Naked Gun’?

So, what’s not to love about the story of a shrunken submarine injected, with a drunken Navy pilot at the helm, into a lowly cashier - who falls for the pilot’s estranged wife and then gets them back together? Martin Short is at his manic best, leading the film, with Dennis Quaid and real-life-then-wife Meg Ryan providing the love interest.

No, wait. That’s ‘Innerspace’, isn’t it? Look, it’s a remake of ‘Fantastic Voyage’. I’m getting close.

To be fair, a big part of the appeal of this film at the time was Raquel Welch – they really seemed to hammer home that she was in it and she was wearing a tight outfit moulded to her curves. Which is a shame. I mean, not to us hot-blooded males. But, it takes away from the amazing movie that this is. I was going to say ‘fantastic movie’ but that would have been too obvious.

The film won two out of the five Oscars it was nominated for – one of which was for the special effects. At the time, these were seen as cutting edge and very impressive. For a science fiction film to gain such recognition was rather a big deal as, up until then, anything within such a genre was generally considered a B-Movie.

Of course, it helps that it was a Cold War film – which was overhanging threat in reality at the time – with the United States pitted against the Soviet Union in a rush to save a man’s life who has the formula for miniaturisation. They do this by, of course, miniaturising themselves and a sending in a small team – one of whom is a traitor – to navigate their stylised submarine through the human body to get to the blood clot that is keeping their clever scientist in a coma.

Noted science fiction writer Isaac Asimov was approached to write the novelisation of the film and turned it down but was essentially badgered into it. He agreed to do so if he could correct some of the plot holes and include an explanation at the end as to why the submarine doesn’t return to full size at the allotted time but the crew do. Such was his quickness in turning the screenplay into a novel, the actual book came out well before the movie and everyone believed it was based on that.

The concept of miniaturisation has, of course, been used before and since – it’s a pretty standard fantasy trope. But, the ‘Fantastic Voyage’ movie uses it in such a unique and genuinely tension-filled way, with nature’s own defence mechanism inside the body as the greatest non-human foe, that it seems new and fresh and needs to be applauded.

What also needs to be applauded is the stand-out performance from the ever-nervy Donald Pleasence, who draws you in slowly with his uneasy eyes and uptight manner. This was one of his early film roles and he creates an ambiguous and duplicitous character that he would return to time and time again throughout his career; that of the mild-mannered maniac.

And should we, as everyone did at the time, applaud Raquel Welch? Well, she gives very strong support. As does her costume.