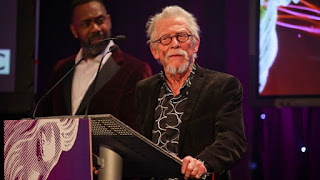 The finalists for the BBC Audio Drama Awards 2018 have been announced...

Sir John Hurt has been posthumously nominated in the Best Actor category for his role as Griffin in The Invisible Man, the Big Finish produced dramatisation of H G Wells' classic story. Other nominations include one for Kate Phillips (Peaky Blinders, Wolf Hall) who is nominated for Best Debut Performance following her role in Radio 4’s Gudrun’s Saga, Resistance by author Val McDermid in the Best Audio Drama (Series) category. Marcus Brigstocke’s play The Red gets a nod in the Best Single Drama category and the adaptation of Salman Rushdie’s Midnight’s Children, which took over the Radio 4 schedule on 15th August - the anniversary of Partition - is nominated in the Best Adaptation category.

The winners will be announced in the ceremony on Sunday 28th January at the Radio Theatre in BBC Broadcasting House, together with the winners of the Imison and Tinniswood Awards for writing for radio, administered by the Society of Authors and the Writers’ Guild of Great Britain.

The Audio Drama Awards recognise the cultural significance, range and originality of audio drama, on air as well as online, and credit the creativity of the actors, writers, producers, sound designers and others who work within the field.

Each category is judged by a team of industry experts including Ruth Jones, David Eldridge, Roy Williams, Indira Varma and Paul Schlesinger. Now in their seventh year, this year's nominations cover audio dramas first broadcast in English in the UK between 1 October 2016 and 31 October 2017 - or first uploaded/published for free listening online in the UK during the same period and entries were welcome from all makers of audio drama, not just restricted to BBC broadcasts.

The full list of shortlisted entries is as follows:

Best Use of Sound

Can’t Get You Out Of My Head, produced by David Hunter for BBC Online
Inside Donald Trump, producer Jimmy Mulville, Hat Trick Productions/Unbound, podcast on Soundcloud and iTunes
Rathband: A Digital Tragedy, producers Jeremy Mortimer and John Wakefield, podcast on iTunes etc