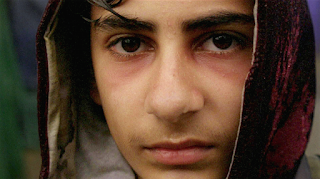 13 year old Aamir has fled his home and been separated from his family only to be stranded alone in the largest unofficial refugee camp in Europe. When he is befriended by Katlyn, a well meaning but thinly stretched British volunteer, she becomes Aamir's last hope for salvation.

I will admit, when I first read the synopsis for this short film, I didn’t have high hopes for it. It smacked of being one of these “worthy” box-tickers of a nomination to highlight what is, absolutely, a real concern, and I was expecting the film to start preaching at me from the get go or to be so sentimental in trying to tug at the heartstrings and portray "hardship leading to happy endings" that it would end up being a sugary cliche.

Vika Evdokimenko has created a powerful look at what can only be described as the post apocalyptic nature of the Calais “jungle.” Aamir’s journey to the camp is very cleverly recreated in tiny cut scenes that act as snapshots in time, from his awaking at home in Mosul to the sound of gunfire, to being separated from his mother who, it seems, has paid for him to be smuggled out, to his trip in the boot of a car, noisy truck stops and, finally, to him wandering the alleyways of shacks in the camp. The bleakness of his mood is echoed by the bleakness of the camp around him. Row upon row of shanties filmed in a washed out colour palette, surrounded by noise and crowds but yet Aamir finds himself completely alone.

However it is that “noise,” the sound design, which elevates this short film above the norm for me. I know I’ve said it before but the use of complete silence in a soundtrack is a brave and dramatic move and, when it cuts in sharply as it does here, after screaming and gunfire, the chiaroscuro effect is superb. Add in the disorientation of muffling the crowd noise as Aamir wanders through claustrophobic alleys that all look the same, not knowing where to turn, and you really get a feel for the petrified paranoia of having to exist in a place like that.

I am also very pleased that the film’s ending has been left ambiguous. Aamir’s final desperate act can be interpreted in so many ways; a clearing of the past to start over, a beacon of hope for a better future, or a sign that the end has finally come and all hope has now gone. It’s left to us as viewers to decide. So, yes, I guess it is a “worthy film” for BAFTA nomination but not in a cynical box-ticking way. It’s worthy because it is the product of a highly skilled creative and technical team who left behind the comfort and safety of the clichéd to challenge their audience and, as a result, got their point across in a much more memorable way.