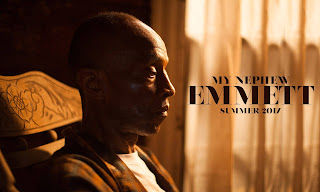 This week, Susan Omand watches some of the short films in the running for the 90th Academy Award final shortlist. Today it's My Nephew Emmett...

The first thing I did, having watched this powerfully written film from Kevin Wilson Jr, having seen that ending and having discovered that it was based on a true story, was to try to find out more about the events surrounding the death of 14 year old Emmett Louis Till because, although it seems to have received extensive media coverage at the time (1955) and appears to be ingrained in the iconography of the Civil Rights movement in America, I am ashamed to say I hadn’t heard about Till before.

Wilson’s telling of the story through this film was very sensitively handled, being close enough to the facts I was able to unearth and it was shocking without being sensationalist, horrifying without being horrific. The scene setting and filming also added to the feeling of realism without being clichéd and a lot was done with very little in order to add to the oppressive atmosphere. Talking of atmospheric, the music composition and execution, riffing on gospel and slavery blues, was utterly brilliant and sent shivers down my spine. However, there is one over-riding factor that makes this film absolutely brilliant and that is the performance of L B Williams as Mose Wright, the 64 year old preacher and uncle (or great uncle in reality) of Emmett. My goodness, that man can act! From the softening of his expression as he talked to Emmett after a night out, to the intense foreboding of waiting for the inevitable to happen, to the pleading and broken subservience of a man forced to “know his place,” Williams carries this film and lifts it head and shoulders above anything, short or feature, that I have seen for a while.

And that final scene of Williams as Moses Wright speaking to the journalist transforming into what looked like actual footage of a filmed statement from the real Moses Wright about what happened on that fateful night before fading to black with the haunting gospel music rising, just put the tin lid on this for me. This is a perfect short film.

If My Nephew Emmett does for anybody else what it did for me, by opening my eyes to something enough to make me research and find out more, then it will have served its purpose. History informs our future. We must never stop learning from it.