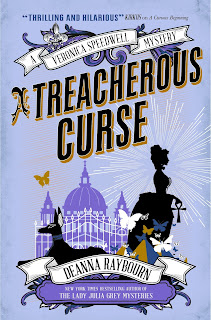 The third book in the Veronica Speedwell Mystery series, A Treachererous Curse by Deanna Raybourn is published next week by Titan Books....


Read Tony Cross' review of the second book in the series, A Perilous Undertaking


Join adventuress Veronica Speedwell as she and her partner Stoker embark on another gripping adventure! In this, Veronica’s third exploit, Victorian London gives way to Ancient Egypt with reports of the God Anubis walking the streets of the capital. Brimming with mystery, intrigue and quick wit, A Treacherous Curse is a fine addition to the series and one that crime fans won’t be able to put down!

London, 1888. Victorian adventuress Veronica Speedwell can’t resist the allure of an exotic mystery—particularly one involving her enigmatic colleague, Stoker. His former expedition partner has vanished from an archaeological dig with a priceless diadem unearthed from the newly discovered tomb of an Egyptian princess, just the latest in a string of unfortunate events that have plagued the controversial expedition. In London, rumours abound that the curse of the vengeful princess has been unleashed as the shadowy figure of Anubis himself stalks the streets.

Sordid details emerge from Stoker’s past, and caught in a tangle of conspiracies and threats, Veronica must separate facts from fantasy to unravel a web of duplicity that threatens to cost Stoker everything…

A Treacherous Curse is published on 9th January