Short Film - Rise of a Star 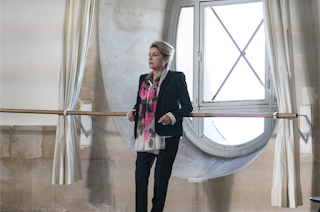 This week, Susan Omand watches some of the short films in the running for the 90th Academy Award final shortlist. Today it's Rise of a Star...

For those of us of a certain age, Ravel’s Bolero will always be intrinsically linked with just one performance, that of Torvill and Dean in the 1984 Winter Olympics, so I thought it an interesting choice as the music for this short film directed by James Bort, although the gradual crescendo fits well with the story itself.

The film centres upon Emma, a ballet dancer who is about to get the chance of a lifetime. However she also has a secret which could jeopardise everything that she has worked so hard for. The story, written by Stéphane Landowski, is a straightforward one which strays into the clichéd at times for me with nothing unexpected but, as a film, it is saved by its execution; being so simple, everything else has to be nigh on perfect and it is.

The lead role is stylishly played by Dorothée Gilbert, who actually is prima ballerina with the Paris Opera Ballet in real life, and she shines as Emma, not just for her technical skill and graceful poise as a dancer but also for her acting ability as she floods what could very well be a cold and aloof character with a warmth of emotion and expression. And this is a tall order when you consider the fact that she is sharing the screen with a doyenne of French cinema in the illustrious Catherine Deneuve, who still shows such star quality and gives her all to her nuanced performance, even in a 20 minute short.

Bort’s direction must also be commended as too should the amazing cinematography of Vincent Paquot. The pacing and framing alongside the innovative use of colour, contrast and light perfectly balances the elegance of the acting and make this a beautiful film to watch and a worthy addition to the nominations list.