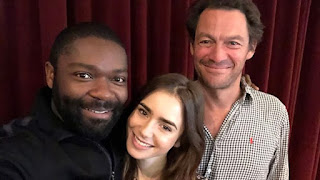 About 18 months ago, we told you that the classic Victor Hugo novel Les Misérables was going to be adapted by the BBC.  Casting has been announced for the new six-part drama (and no, we won't hear the people sing)...

Multi award-winning screenwriter Andrew Davies will go back to the original novel for the new drama series and delve deep into the many layers of Hugo's story, revelling in Jean Valjean and Javert's cat-and-mouse relationship, against the epic backdrop of France at a time of civil unrest. With "a striking intensity and relevance" today, the novel documents the struggles of France's underclass and how far they must go to survive. It sounds like the six part television adaptation of the renowned book will faithfully bring to life the vibrant and engaging characters, the spectacular and authentic imagery and, above all, the incredible story that was Hugo’s lifework.


The cast will be led by Dominic West who will star as Jean Valjean, and David Oyelowo as Javert.

Dominic West said “Jean Valjean is one of the great characters in world literature. His epic journey of redemption is one of the extraordinary roles an actor can take on, and I can’t wait to get stuck in to bringing Andrew’s brilliant adaptation to the screen.”

David Oyelowo added "To play an iconic role like Javert is any actor’s dream, but to play it as written by Andrew Davies goes beyond my wildest dreams."

They are joined in the epic new event drama by Lily Collins, as Fantine, and she was "so thrilled" to be playing the role, adding "She is a legendary character whose tragic story feels as relevant to tell today as when Les Misérables was first published. Andrew’s wonderful dramatisation opens up the character in fresh ways that I’ve never seen before in previous adaptations. And with this amazing cast coming together it really feels like it could be something very special indeed."

Andrew Davies said of the casting, “This is such an intense and gut-wrenching story and I am delighted that this esteemed ensemble of actors will be bringing it to life - led by Dominic West and David Oyelowo in the iconic roles of Jean Valjean and his nemesis Javert. In Valjean, we see the terrifying anger and resentment against society but also the tenderness that is hidden deep in his complex psyche. And in Javert, the ferocious dedication to duty that takes him from obsession to madness.”

Executive Producers will be Andrew Davies, Faith Penhale for Lookout Point, Bethan Jones for BBC Studios, Mona Qureshi for BBC One, Rebecca Eaton for Masterpiece, Dominic West and David Oyelowo. The 6 episode series will be produced by Chris Carey and directed by Tom Shankland.