Book - Extract from The Fire Pit by Chris Ould 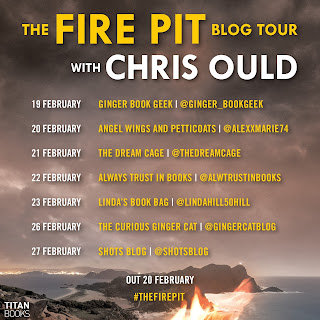 Today we are delighted to be part of the blog tour for Chris Ould's new Faroes thriller, The Fire Pit. Thanks to Chris and Titan Books you can read the start of Chapter 1 below...

ON THE HILLSIDE BELOW THE LAST REMAINING HOUSE AT MÚLI, Hjalti Hentze waited. There was a light rain in the air, not yet heavy enough to make a noise as it landed on the various pieces of plastic sheeting around the stone wall of the sheepfold.

“You people have to stop killing each other,” Sophie Krogh said, somewhat muffled.

“Yeh, you keep saying that,” Hentze told her.

“Well, you keep on finding bodies.”

“This one’s hardly anything to do with us, though, is it?”

Hentze said. “I mean, it’s not recent. Jan Reyná thinks it’s been there for a decade at least.”

“And he’s an expert is he?” Sophie asked, somewhat drily.

Hentze didn’t say anything. It was hard to have a conversation with someone’s backside, which was effectively what he was doing. Sophie Krogh was on her knees, her head down by the hole in the base of the wall, peering in with the aid of a torch.

Finally she wriggled backwards on the plastic sheet, then stood up.

“So what do you think?” Hentze asked, glad to finally be face to face again.

Sophie assessed the circular wall. “There are definitely remains in there still. We’ll assume that they’re human, given the skull was found nearby, so we’ll have to dismantle the wall by hand. There’s always a chance that something else is in the stones above the body – or below it, come to that.”

Sophie shook her head. “We’re busy enough as it is. No, I’ll do the extraction myself if you can find me some muscle to help move the stones.”

“A couple should do. More than that and you risk missing something or just get in each other’s way.”

“Okay, I’ll find a couple of guys who don’t mind labouring on Sunday. Any idea how long it’ll take?”

She looked at the wall, then the sky. “A day – probably. Depends what I find. It’s too late to start now, though, and she’s not going anywhere, so I’ll record things as they are, then we can start first thing tomorrow.”

“So you agree with Reyná that it’s a female?”

“Based on the skull, yeh, I’ll give him that. But you’ll need to have Elisabet Hovgaard confirm it when we have all the bones. Do you have any sort of tent we can put up while we work?”

“Okay, tak. And you never know, if you’re lucky she’ll turn out to be a hundred years old and then you can forget it.”

Hentze shook his head. “I’m never that lucky,” he said, then looked away as a waterproof-clad figure strode up the hillside towards them. She was a young woman in her twenties, red hair spilling out from her hood and her face flushed with the exertion.

“This is my friend Katrina,” Sophie said. “She wanted to see the islands so she flew out with me for a couple of days.”

“It can’t be much of a holiday for you if Sophie’s working,” Hentze said. “Aren’t you bored?”

“Actually, I think it’s really interesting,” Katrina replied. “I mean, I get to see what Sophie does all day. I think that’s exciting.”

“Exciting? Oh, well, yes, I suppose so,” Hentze said, but he saw Sophie roll her eyes slightly as she turned to take a camera from a flight case on the ground.

“Is it okay to look at the burned-out house?” Katrina asked then.“It’s not a crime scene or something?”

“No, you can look,” Hentze said, “but don’t go too close. The whole thing’s unstable.”

“I’ll be careful,” Katrina said. And to Sophie, “Meet you at the car?”

“Yeh, give me five minutes.”

Katrina set off up the hill at an enthusiastic pace and Hentze turned to Sophie with a questioning look.

“I was just thinking that you know how to show your girlfriend a good time.”

Sophie drew a sigh. “To be honest, I wish she’d stayed in Tórshavn to look at the shops or something.”

“Oh? I thought this was a new and exciting romance. Isn’t that what you said the other day?”

“Yeh, well, that was then and this is now,” Sophie said gloomily. “I barely get to go for a piss on my own. It’s claustrophobic.”

“Ah, well, there’s no one as enthusiastic as a new convert,” Hentze said drily. “Didn’t you say that, too?”

“Okay, go ahead and make fun,” Sophie said. “I probably deserve it.”

Sophie gave him a look, then lifted her camera to take some photographs of the site. “So what’s the story behind all this?” she asked, changing the subject. “There was a fire and a guy was found dead, is that right?”

“Yeh, his name was Justesen,” Hentze told her. “He owned this land. He was also an alcoholic and terminally ill, so it looks like he hanged himself and his final cigarette burned the place down.”

“And this?” Sophie asked, gesturing at the hole in the partly dismantled wall.

“We’re only guessing, but at the moment I think Justesen uncovered the body – well, the skull anyway – before he died. Maybe it was some sort of act of contrition; not wanting to kill himself and leave her in an unknown grave. We don’t know.”

“Well he might have had the decency to do the job properly and take down the whole wall,” Sophie said, snapping a last photo of the hole. “Some people have no consideration.”

“No, no, that’s true,” Hentze said seriously. “But still, I expect if you give her the chance, Katrina will be only too glad to lend you a hand. Shall I ask her?”

“Don’t you bloody dare,” Sophie said. “Otherwise you might find yourself under your own pile of rocks.”

Thanks again to Chris Ould and Titan Books for allowing us to share this extract.