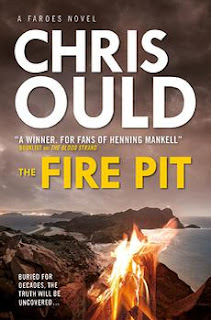 Susan Omand heads back to the Islands as she reads the final part of Chris Ould's Faroes Trilogy, The Fire Pit, thanks to Titan Books...

In the wake of a dying man’s apparent suicide, the skeleton of a young woman is discovered on a windswept hillside. Detective Hjalti Hentze suspects that it is the body of a Norwegian woman reported missing forty years earlier, while a commune occupied the land, and whose death may be linked to the abduction and rape of a local Faroese girl.

Meanwhile British DI Jan Reyna is pursuing his investigation into his mother’s suicide. But as he learns more about her final days, links between the two cases start to appear: a conspiracy of murder and abuse spanning four decades. And as Hentze puts the same pieces together, he realizes that Reyna is willing to go further than ever before to learn the truth…

I’ve waited a whole year since the release of The Killing Bay to read The Fire Pit and fell happily headlong into this new story which, again picks up the day after the events in the previous book, with the aftermath of the explosive finale and the investigation of a new crime that was unearthed at the end of The Killing Bay. As I’ve said before in the reviews of this book series, it does help to have read the prior books because there is little explanation at the start of the whos, whats and wheres but this means that you can dive, like I did, straight into the action. The characters are so well written anyway that you soon pick up who they are and start to fill in any gaps as the story goes on.

Talking of filling in the gaps, whereas the previous book was much more centred on the wonderful Faroese Detective Hjalti Hentze, this time we’re more back with Jan Reyna, the Faroe Islander who is a DI in the UK and was the main focus of the first book in the trilogy, as we fill in the gaps in his stories, both in the UK and on the Islands and in Denmark, to bring the long story arc, of his search for answers to his mother’s suicide, to a conclusion. That’s not to say we don’t get anything of the island investigation this time as both stories run cleverly in parallel. I really liked the fact that Reyna’s story sections are told in first person, as if it was him speaking, while the rest of the characters stories are told in third person, whether or not Reyna is involved. And I very much enjoyed the complexity of both story strands, with a slow and involving burn on both, adding information in drips, not slow enough that you lose interest but not in great lumps either, so you do have time to make your own decisions before the next piece of the puzzle completely wrong foots you and you have to take a different train of thought. Nothing in the plot seemed forced nor any illogical leaps of faith were made though, it was just very intelligent writing that tied up and unravelled the story with equal measure, and there are plenty grey areas to mean that people involved are often neither all good or all bad. The culmination of the investigation had me absolutely gripped, the suspense was palpable, the action fraught and the misdirects superb.

That all makes it sound like I really enjoyed the book, which I absolutely did, a lot, so why do I say I’m annoyed?

I’m annoyed because it really is finished! I had hoped that the Faroes novels would be an ongoing series of books with more planned after this and was dismayed to discover that it is only going to be this trilogy. No more waiting in anticipation of the next book coming out, no more visualising the beautiful bleak scenery and enjoying the placenames and the language. I’ve loved reading about the islands, and the accuracy with which Ould has captured the essence of island life and the quirks of its people is superb. The characters too, especially Hentze and his team, I feel have so much more to tell, and there are even more possibilities introduced with the addition of the Danish police resources. However, I guess I must accept the reality that all the loose ends have been tidied up, the conclusion I expected to happen didn’t, and there is to be no more Faroes noir, at least in this series of books. So I guess I’ll do what I always do when I finish a trilogy, start reading from the beginning all over again.

Read our reviews of the other two books in the trilogy - The Blood Strand and The Killing Bay.
The Fire Pit was Published on 20th February.