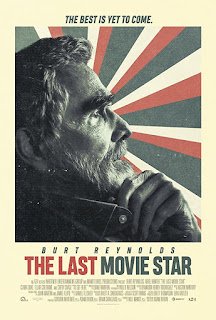 There's a new film coming out starring BURT REYNOLDS (yes it needs to be in capitals) - watch the trailer for The Last Movie Star...

"You are the only one stupid enough to show up..."

You may have seen some festival stuff about this film last year but not realised it, as the film used to be called Dog Years.

Vic Edwards (Burt Reynolds) was the biggest star in Hollywood, a college football legend turned stunt double turned leading man. Now, in his eighties, he’s convinced by an old friend (Chevy Chase) to accept an invitation to receive a Lifetime Achievement award at a two-bit film festival in Nashville.

Whether intentionally or otherwise, the trailer at least seems to be playing to Reynolds' strengths, using what feel like his own stories and experiences, and the film promises to be a poignant but feel-good movie about growing older.

Directed by Adam Rifkin of Toy Soldiers fame, starring alongside Mr Reynolds are Ariel Winter, Clark Duke and Chevy (yes really) Chase as Edwards' agent Sonny. The film comes out in the US at the end of April and I think we need to shout about it a bit to get it over this side of the pond soon.