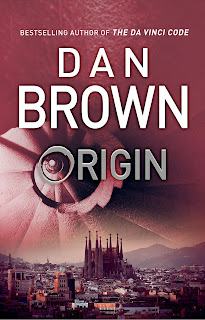 Where did we come from? Well, Steve Taylor-Bryant came from the book-shop with the new Dan Brown novel, Origin...

There’s something quite comfortable about a Dan Brown book. They are like Alex Jones conspiracy theories but with fewer nut job opinions and, when you’re reading a Robert Langdon novel, you are basically treating yourself to an hour or so of Tom Hanks dulcet tones. Dan Brown books may not be the most popular amongst your friends or win awards for literature but, trust me, the man can tell a tale and craft a vision extremely well. With Origin we are back on familiar ground, religion versus the world with Langdon wrapped up in the middle again.

Robert Langdon, Harvard professor of symbology and religious iconology, arrives at the ultramodern Guggenheim Museum in Bilbao to attend a major announcement—the unveiling of a discovery that “will change the face of science forever.” The evening’s host is Edmond Kirsch, a forty-year-old billionaire and futurist whose dazzling high-tech inventions and audacious predictions have made him a renowned global figure. Kirsch, who was one of Langdon’s first students at Harvard two decades earlier, is about to reveal an astonishing breakthrough . . . one that will answer two of the fundamental questions of human existence.

As the event begins, Langdon and several hundred guests find themselves captivated by an utterly original presentation, which Langdon realizes will be far more controversial than he ever imagined. But the meticulously orchestrated evening suddenly erupts into chaos, and Kirsch’s precious discovery teeters on the brink of being lost forever. Reeling and facing an imminent threat, Langdon is forced into a desperate bid to escape Bilbao. With him is Ambra Vidal, the elegant museum director who worked with Kirsch to stage the provocative event. Together they flee to Barcelona on a perilous quest to locate a cryptic password that will unlock Kirsch’s secret.

Navigating the dark corridors of hidden history and extreme religion, Langdon and Vidal must evade a tormented enemy whose all-knowing power seems to emanate from Spain’s Royal Palace itself... and who will stop at nothing to silence Edmond Kirsch. On a trail marked by modern art and enigmatic symbols, Langdon and Vidal uncover clues that ultimately bring them face-to-face with Kirsch’s shocking discovery... and the breathtaking truth that has long eluded us.

Whether you think Brown sets out to upset people on purpose, or that he’s basically a Wikipedia page with sentence structure, or whether you believe he’s the greatest author of all time, it matters not. Dan Brown is going to grab you and he’s not going to let go until the last page. Whilst The Lost Symbol remains my favourite of the Langdon novels, Origin gets close. The two questions that are the basic premise of the plot, where do we come from and where are we going, are enthralling enough to think about but when added to drama the questions and the various responses you would get from all walks of life elevate a story beyond mass paperback levels and into that “quite clever” category which I like to find myself in. The characters in Origin are all strong in their parts, something that hasn’t always worked in Brown books, and from the fictional incarnation of Elon Musk, Edmond Kirsch, through museum manager and future Queen of Spain, Ambra Vidal, to both sides of the Catholic Church, traditional and Palmarian, every single character introduced adds something to an already strong narrative. Brown's use of buildings and elegant description are as good in Origin as ever and, whilst some of the book is a tad formulaic, I finished the novel feeling truly entertained which is kind of the point. I also want my own Winston, he seems so much more fun than Siri.