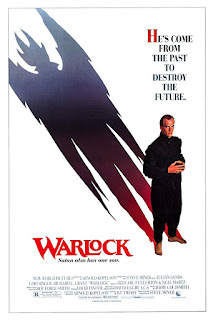 VentSpleen has been unpacking some of his long neglected DVD collection. Up today is Warlock…

Recently, I came across this absolute classic and had to rewatch it. How can anyone resist an eighties horror which features Richard E Grant and Julian Sands going head to head?

Warlock is one of those films that, as soon as you mention it, gets everyone all excited and breathy. It has rightly come to be regarded as a cult classic and it grows in stature the more you watch it. I honestly don't believe that Richard E Grant and Julian Sands have ever turned in a bad performance. Yes, they have been in some dire films (Spice Girl Movie and Arachnophobia) but you can’t ever accuse them of phoning in performances. Which is probably why Warlock works as well as it needs absolute sincere and earnest performances from its two leads if anything that transpires is to be effective. Grant plays Giles Redferne a Witch Hunter in the 17th Century who ensnares Sands nasty Warlock. Just as the Warlock is about to pay for his dastardly crimes Satan appears (as he is oft to do) and propels the Warlock to the modern day via a portal (unusual twist on the dark one's part). Redferne wastes no time in following and the ensuing battle over many states erupts as the Warlock wants to bring about the end of the world. Finding the ancient book, Grimoire which some clever Priest types have scattered and hidden.

Redferne is aided by Eighties girl Lori Singer (sigh) and his encyclopaedic knowledge of Warlocks and their magical meanderings. In addition to a typically brilliant musical score by none other than Jerry Goldsmith what sets Warlock apart from the other horror films of the time is a brilliantly worked story and some surprisingly impressive effects. I think the production team very cleverly avoided over reach by not showing too much gore onscreen. The Warlock doesn't think twice in killing but most of the more gruesome deaths are completed off screen, leaving the imagination to do what eighties tech couldn't achieve. The film also has a wonderful atmosphere of levity which effectively underpinned the performances from Grant, Singer and Sands (sounds like an Eighties beat combo)

Favourite scenes for me include the effectively creepy possession sequence and the weather vane throw by Grant which would make an Olympic Athlete a gold medal winner. Warlock is not without its drawbacks and some of the eighties imagery and clothing (Singer can be accused of wearing some classics) does not date well. Grant should never ever attempt a Scottish accent again, not without first spending many, many hours copying a true Scot. It's totally avoidable as well because Redferne could have been from any part of the UK! These faults can be overlooked and Warlock's success spawned two further sequels (although neither featured Grant and only one featured Sands.) It wouldn't surprise me at all if Warlock makes it onto the remake table in the near future but nothing will surpass the original for style and character.