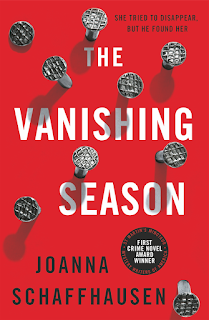 Titan Books announce the publication at the end of this month of the debut crime novel from American TV journalist Joanna Schaffhausen, The Vanishing Season...

Fourteen years ago, teenager Ellery Hathaway was victim number seventeen in the grisly murder spree of serial killer Francis Michael Coben. She was the only one who lived.

Now Coben is safely behind bars, and Ellery has a new identity in a sleepy town where bike theft makes the newspapers. But each July for the last three years, locals have been disappearing. Then Ellery receives strange messages hinting that the culprit knows exactly what happened to her all those years ago. When she tries to raise the alarm, no one will listen, and terrified she may be next, Ellery turns to the one person who might believe her story.

Agent Reed Markham made his name on the Coben case, but after a major mistake leaves a young child dead on his watch he’s no longer a star of the FBI. Is Ellery’s call for help his chance at salvation, or just further evidence that while he may have rescued her all those years ago he failed to save her too?

A chilling tale of suspense for fans of Julia Heaberlin, The Vanishing Season is a gripping exploration of identity and evil. Offering a page-tuning read, Schaffhausen’s debut is a commercial thriller that will keep the reader transfixed.

Joanna Schaffhausen is a scientific editor who previously worked as an editorial producer for ABC News, where she advised and wrote for programmes such as World News Tonight, Good Morning America and 20/20. She lives in the Boston area with her husband and daughter.

The Vanishing Season is published on 27th February and is available to pre-order now.