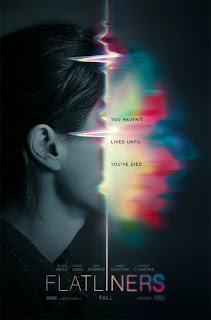 Steve Taylor-Bryant dared to cross the line and watched the Flatliners remake...

I’m not as prissy as some folk when the subject of remakes come up. Yes of course there are films that shouldn’t be touched, Godfather obviously, and yes of course I’d prefer it if Hollywood had some faith in the original ideas that filmmakers have, but never remake a film? Really? You’ll take Sinatra’s Manchurian Candidate over Denzel's? There’s also films that weren’t that great in the first place but may have had a concept or narrative that could use some modernisation maybe, and then there’s films I haven’t thought about since they came out, so how can I be possessive about the original?

One such film is 1990’s Joel Schumacher film Flatliners. It was great at the time, an interesting concept in the afterlife coming to get you in the real life, and Kiefer Sutherland was pure genius throughout, a masterclass in over acting and chewing scenery but getting away with it because, well, you’re Kiefer Sutherland. Even with Schumacher directing and a cast including Julia Roberts and Kevin Bacon, the film is only memorable today because it was the first time many of us my age can remember the possibility of the afterlife coming true hitting the screen, certainly in mainstream cinema, but I was only 15 when the original came out, The X-Files and its ilk hadn’t been released yet. However, even with all this going for it who can honestly say the film holds that much of a special bond within your soul that it’s exempt from remake treatment? No-one, that’s who, so remake it they did.

Five medical students embark on a daring and dangerous experiment to gain insight into the mystery of what lies beyond the confines of life. The bold adventure begins when they trigger near-death experiences by stopping their hearts for short periods of time. As their trials become more perilous, each must confront the sins from their past while facing the paranormal consequences of journeying to the other side.

And now there is conflict in my mind. I’m torn between ‘there’s an hour and a bit of my life I’m not getting back’ and ‘that was a pretty good film’. I can’t fault most of the cast, I thought Ellen Page was brilliant, I enjoyed the straight man performance of Diego Luna, and James Norton along with Kiersey Clemons were watchable. I wish Nina Dobrev had been a bit more film star than television star but she wasn’t that bad and even Kiefer Sutherland rocking a Julian Asange in Albert Einstein fancy dress look was okay. The film was beautifully shot and Niels Arden Oplev definitely has a nice touch with direction which made the whole horror element palatable for those of us whose stomachs don’t like the horrific. The soundtrack from Nathan Barr was fitting, and in the first afterlife experience of Page’s, it was stunning. The film lacked something though and I think that something was the element of surprise, I’d seen it all before. What Manchurian Candidate and even Clooney’s Eleven did was bring something new to the game. They took the basic premise of what had come before and then took it up a level. What the new Flatliners gave me was a glossy version of what I’d seen all those years ago, right down to the ‘It's a good day to die’ quote, but then I spoke to my nearly nineteen year old boy and realised that I’m not the audience for this film, he is. This is new to him, he’s never watched old science fiction, I’m not sure that he’s even watched a film from last century, new Flatliners is for him. The dialogue is fresh to him, the shocks and the twists are surprising to him, it’s modern looking and therefore must be new, it’s got actors he’s heard of in it. New Flatliners is a great film if you’re a teenager, it’s just a waste of your night if nearly forty three.