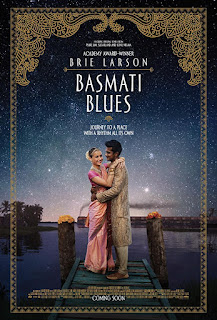 Brie Larson is the Disney Princess you didn’t know you needed.

Seriously, this film is one cutesy talking animal away from being a Disney cartoon. There’s heroes and villains, comedy sidekicks, scene setting montages, a fairytale love triangle and serious morality issues, oh and annoyingly catchy songs, all set against the technicolour landscape of India. If you love Disney you will adore it.

But what about those of us that DON’T love Disney? As long as you don’t go in with the high expectations of complex plot that the cast list suggests, it’s an entertaining but vacuous film to switch off your brain with for an afternoon. That’s not to say that any of the cast is bad in it, far from it. Brie Larson can actually sing and she played the serious but oh so naive scientist very well indeed. As Doctor Watt, she and her scientist father, played by the vastly underused Scott Bakula, are duped into thinking they’re feeding the world by helping to sell a genetically modified, disease resistant, high yield crop called Rice 9 (it even has a jingle and T-shirts!) to the farmers of India. Instead, the sterile seeds and complicated sales contracts are being used as a money making/land grabbing opportunity by the evil corporation Mogil, headed up by the superbly scenery-chewing chairman of the board Donald Sutherland and his evil hench/assistant, Tyne Daly. As an aside, one of the best songs in the film is about half way through, when Sutherland and Daly give their nefariously persuasive plans the big 42nd Street style Broadway show treatment, including a tap dancing chorus line – if this film WAS a West End Musical, this would be the song just before the interval.

Doctor Watt’s trip to India is further complicated by William (Saahil Sehgal), the ambitious young government official assigned to her, and Rajit (Utkarsh Ambudkar), the environmentally aware agricultural student forced to drop out from college and return home because of lack of funds, both falling for her charms. Add in William’s pushy mother, Rajit’s poor but happy parents and wise older sister, a gaggle of jovial farmers and a holy man with a horse and you get exactly what you expect as the story hits every cliché on after the other in the scientific formula book for a good family/Disney film, from comedic disasters, to romantic moments, to dastardly double crossing and an epic final desperate chase, before it reaches the panto-style walk-down happy ending with a *spoiler* wedding! *sigh*

As I say, don’t expect a complex, emotional, multi-layered musical like La La Land. Treat the film for what it is, a simple tale of boy meets girl across a crowded paddy field, and you won’t be disappointed. What you will be doing though is catching yourself humming the songs long after the film has finished!