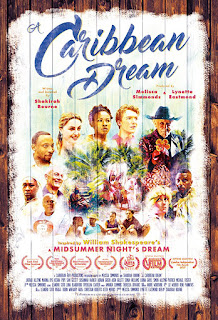 Coming to DVD next week, Susan Omand gets to the Bottom of a new Shakespearean adaptation, A Caribbean Dream...

The problem for me with adaptations of Shakespeare’s plays is that his well known works are REALLY well known and it’s often difficult for an adaptation or “re-imagining” to bring something fresh or different to the screen.

A Caribbean Dream is both fresh and different.

A Caribbean Dream is a re-imagining of William Shakespeare’s romantic comedy, A Midsummer Night’s Dream. Set in modern day Barbados, Theseus and Hippolyta are returning Nationals. This traditional tale takes a twist with the creation of new characters where Mechanicals are re-imagined as Fishermen, and Bottom as a Black Belly Sheep, along with Birdman and a Changeling Boy. Chaos and madness unfolds at night, exploring Caribbean folklore and culture. This is a unique and entertaining re-imagination of one of Shakespeare's most beloved comedies.

Picking up on the official synopsis above, it’s the setting that I want to mention first. The locations, set around Fustic House in St Lucy, Barbados, are absolutely gorgeous. The lush forests are ideal places for the fairies to play and the beaches give a perfect backdrop for the amateur dramatics of the labourers, recast here as a group of fisher folk. And this merry band of fishers is a highlight of the whole film. The comedy and chemistry between them was glorious and lifts them far above the bit part roles that the players usually have in a Midsummer Night’s Dream. I found myself wanting to see more of their “rehearsals” and discussions and, after her star turn here as Bottom, I expect to see Lorna Gayle’s name cropping up in a lot more places. Another piece of inspired casting was Patrick Michael Foster who made Puck into a wonderfully camp Quentin Crisp type that literally sparkled with mischief. Actually, all the casting works very well and the diversity in the ensemble succeeds very much as it should in everything, not being noticeable or forced, not feeling shoe-horned in for the sake of it, but natural to the reworking of the play.

However there was one thing that I found didn’t work for me at all and that was the retention of the Shakespearean language in the dialogue. The archaic words, which do often work in updated Shakespeare, seemed very out of place in this setting, especially since the re-imagined parts of the story which strayed away from the original had dialogue in modern English and, sometimes, Bajan. It would have been utterly wonderful to have the whole thing performed in colloquial language!

That’s not to say it was a bad film, or adaptation, though. In fact it very much reminded me of Russell T Davies’ adaptation of a Midsummer Night’s Dream for the BBC (read my review of that here) in the lushness of the setting, the lightness of touch and the complete lack of preciousness over canon. Even the cinematography feels more like a quality TV drama than a cinema release (this is not a bad thing by the way) and I think it will work well as a home watch, either on DVD or digital streaming.

All in all, an enjoyable 80 minutes viewing but I think that, had they not used Shakespeare’s words, they could have changed the character names and dropped the “Shakespeare” bit altogether from the marketing, leaving it to the viewer to make the literary connection, so they could let A Caribbean Dream stand on its own merit as it deserves to.