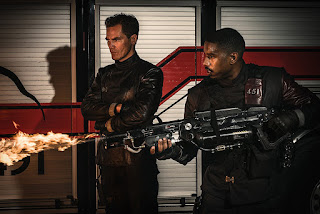 A new TV Movie adaptation of Fahrenheit 451 is coming to HBO...

Starring Michael B. Jordan and Michael Shannon, Fahrenheit 451 is based on Ray Bradbury's classic novel. In a future where the media is a drug of the masses, history is rewritten and "firemen" burn books to prevent knowledge, culture and free thought falling into "the wrong hands". Jordan plays Montag, a young fireman who struggles with his role as law enforcer. Battling his mentor, fire captain Beatty, played by Shannon, he forsakes his world in an effort to regain his humanity.

When you consider the fact that the original book was written in 1953, the story seems very prescient for its time. There have been adaptations of the novel before, including the famous 1966 film version, a radio drama and even a stage play that Bradbury wrote himself, but it seems ever more appropriate in the age of fake news, net neutrality and history being selectively written.

Director Ramin Bahrani explains his interest in the story and its themes, “I have always loved Ray Bradbury's prophetic novel Fahrenheit 451. Two years ago, as I looked at the world around me, it seemed like the ideal time to do a modern interpretation.”

And yes, we know this new version is on HBO and the UK may or may not get it but there's every possibility that Sky Atlantic will pick it up as they have done with a lot of other HBO films and series recently.