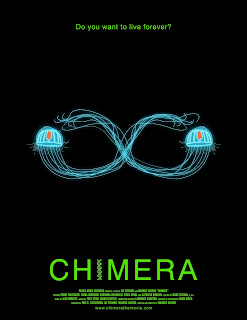 It's the appliance of science as Ren Zelen watched Chimera...

I have to applaud Maurice Haeems for his ambition as writer and director of the sci-fi horror Chimera. In this, his feature debut, he attempts to tell a tale that leaves behind some knotty philosophical topics for debate. If you are the kind of sci-fi film buff that enjoyed Shane Carruth’s Primer (2004) or Keir Burrow’s Anti Matter (2016), you may well find that Haeems’s Chimera shares similar aspirations.

To reduce Chimera down to its gist - a brilliant scientist, Quint, (Henry Ian Cusick) is involved in cutting-edge research in regenerative medicine, organ harvesting and genetics. His motivation in striving for a revolutionary breakthrough in cell regeneration is a personal tragedy - his two beloved children, Miles (Raviv Haeems) and Flora (Kaavya Jayaram) share the same fatal genetic disease that has afflicted their mother Jessie (Karishma Ahluwalia).

Quint frantically works on decoding the DNA of the immortal Turritopsis jellyfish, in the hope of finding the answer to a cure that will aid his family to regenerate their failing organs by eliminating the effects of aging and decay, in effect, making them immortal.

Quint can only fund his secret work by the illicit sale of body organs (which he grows inside pig hosts) and also by reluctantly using the resources of a ruthless and morally corrupt businesswoman, Masterson (Kathleen Quinlan) who agrees to provide the illegally procured stem cells he needs. However, Masterson only wants to use his research to cure her diseased husband and immortalize herself.

Quint continues to be held to ransom by Masterson’s promise of stem cells, but time is running out for his children. He is forced to subject them to a process of dehydration and freezing in order to buy himself some time, while he harvests the eggs of his comatose wife, who he is keeping alive on life support.

Chimera may contain some complex scientific and moral concepts but, at its core, it is a tale of love, loss, grief and moral decline. Haeems assumes that his audience is intelligent and up to the task of unravelling a complicated narrative structure, but he does not make this easy - he has placed obstacles in his own narrative path by constructing the film with different timelines running concurrently, further complicated by flashbacks and hallucinations.

Quint is prone to mental disturbances which are possibly drug-induced (he himself is seen to frequently pop mysterious blue or red capsules). His dream-states often serve to tangle up the narrative flow and make it difficult to distinguish which are actual events (past or present) and which are Quint’s ongoing hallucinations.

He has frequent verbal debates with manifestations of his ‘live’ wife (who we have seen is comatose). She seems to act as a representation of his nagging conscience and moral compass, putting forward arguments against most of the actions he considers necessary for his work, and appealing to his increasingly tenuous connection to his own humanity.

Quint’s children appear, sometimes in a different timeline, sometimes as hallucinations, usually with the boy Miles explaining his father’s scientific pursuits to his younger sister Flora. This is a way of introducing the scientific theories in the storyline, but also makes the child Miles sound oddly precocious, as he outlines sophisticated scientific procedures (presumably to enlighten a predominantly adult cinema audience).

To relay this complex tale of controversial science, Director Haeems has enlisted a committed ensemble cast. Emmy-nominated Cusick, as the increasingly unhinged scientist Quint, manages to convey the conflict between his feelings as a father with those of the impassioned scientist.

In her role as the deviously psychopathic Masterson, (and despite contending with some stilted dialogue), the Oscar-nominated Quinlan is poisonously unbalanced, and it was intriguing to see her sinister, brutal henchman Grize, played by a female – and at a muscular 6'8" Erika Ervin cuts a pretty imposing figure!

Jenna Harrison as Quint’s colleague Charlie, gets to play an interesting role - ostensibly romantically obsessed with Quint, but also rabidly professionally ambitious. She instigates a twist in the final act which suddenly projects the narrative into linear, logical and chronological order, (possibly a godsend for those who found the previous methods confusing) which may herald a shift from Quint’s disturbed point of view to Charlie’s more focussed objective.

Chimera can boast slick camera work, CGI and practical effects which transcend its budget, realistic set designs, capable performances from the cast and an inventive use of sound. It is an intriguing film which is not afraid to raise discussion about controversial medical research into the use of human stem cells, cryptobiosis, artificial protein synthesis and cloning, and the philosophical question surrounding the ability to regenerate cells indefinitely. Although a fragmented and challenging narrative thread hampers Chimera’s impact, I still salute its ambition.