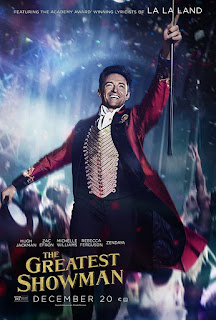 Now here’s a film that I never thought I’d watch, mostly because I’m usually not a fan of musicals and it was mainly through the interesting fact that this is based on a true story and that Hugh Jackman plays the main character (who is a terrific actor) that I thought about trying something new and seeing what a musical based on a true story would bring to the table.

I know now that this film is different, in many ways it’s better than I expected, and brings across themes that make it suit many audiences. The first thing that made this film enjoyable was the opening song, the rhythm of the song itself was very enjoyable and the lyrics itself had a flair to them (such as the line “impossible comes true”, which I often liked to see in science fiction/fantasy as a child) that brought out the child in me (you could say). Although there were other songs throughout the film that I wasn’t too fond of, it’s what makes this film suitable for the family as it has a different song that can appeal to a different person. And the themes of the film can appeal to everyone, of course there’s a clear theme of love, which everyone hopes to keep hold of or just find some day, but there’s also a great message of acceptance and equality to this film.

The first clear sign of this film following the theme of equality and acceptance is when the main character, P.T Barnum (played by Hugh Jackman), brings this group of people together to simply make money, but it builds into more of a family because they all get along so well and end up looking out for each other simply through them all understanding what it’s like to be an outsider. And of course this is conveyed also through the theme of the rich and poor, which we see when Hugh Jackman’s character is a child who has to steal to survive, who eventually is without his father and in that sense who becomes an outsider as he has no-one to look out for him, no-one who cares for him (with the exception of the girl that he fell in love with whom he cannot visit). This shows him as being an outsider from society as he does not have the same rights as others, such as the right to be in a warm home and the right to have food and water. that the girl that he falls in love with ends up running off with him, tells the audience that, whether you’re an outsider or not, it shouldn’t matter.

The theme of race equality is also strong in this film. In some ways during the time in which these events were set, people were wary of those of a different skin colour, and the fact that this does not matter is also conveyed in this film through Zac Effron’s character in this film and through Anne Wheelers character. It shows how a man who to begin with, cares for this girl, but at the same time is wary what other people think of him, and he grows to realise that this does not matter and what matters is what you think, and of course simply that he is with a group of outsiders shows that he is not alone in accepting this girl and it’s through this character realising this that the audience can realise that it doesn’t matter what other people think, as long as you’re happy with who you’re with or who you are. What really brings across this character realising this is that he goes inside a burning building in the hopes of finding her when he thinks that she is in there, and that itself is a pretty strong message to its audience. And of course we see the protesters outside the performances who disagree with some parts, if not all aspects of the show, and that the performers do not care shows that the audience should not care what other people think and no matter your race, status in society, weight, height or gender, you can achieve what you want, regardless of what some may think of you.

The line of the film that really conveys this message of equality and acceptance is that some may call their show a ‘celebration of humanity’ which I thought was just brilliant as in many ways that is what they represent as they all of so many different backgrounds, and that different kinds of people go to watch them, says to us that there will always be people willing to look past background, race or any other indifference and care more for the person or the act, and will therefore, treat them more as a human through realising that at the end of the day that’s what we all are, and we should all be treated as such. 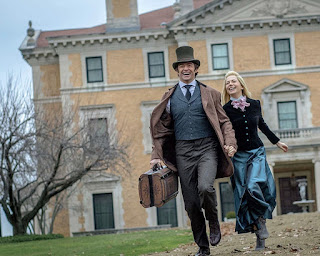 Putting the themes aside for a moment, I would like to talk about the story itself. It’s a story of how a man comes to aspire to be good enough to create a good life for his family that eventually grows beyond this. This man begins as a poor boy to begin with, who is working for a rich family (which juxtaposes the opposite ways of living at the time), and losing his father makes his childhood more difficult and this drives him to make a better one for his daughters when we soon after see him when he’s reached adulthood. Even when his family is living comfortably in a big house he still wants a better life through his fear of losing everything he has worked to provide for his family. It is an irony of sorts, that his family is losing him anyway because his work is stopping him from having to time with his family, as he doesn’t get to see his own daughter’s performance.

The energy and emotion conveyed throughout this film is what makes the story as compelling as it is, and one of the things that really brings across the messages and themes is the music. There were a few moments in which I wished they would not sing, but of course, it depends on the person at the end of the day so of course I cannot judge, but a lot of the songs in the film are there for a reason, to appeal to a type of person as well as convey strong emotions of characters, whether it be sadness, joy, or simply hope to aspire for greatness. And that’s what I think is great about many of these songs is that they can appeal to many, even if there were a few that didn’t appeal to me, I don’t mind that, as its not meant for me, so I’ll leave it for those who it does appeal to, to judge it. So now lets talk about a few of the best songs of the film.

One of these songs that I did really enjoy is the main song that is titled ‘the Greatest Showman’. The lyrics of this film are used very cleverly, as, in one moment of the film, towards the end he when he realises that he needs to be satisfied with what he has, he re-sings the line, ‘everything you want is right in front of you’. And this shows that the girl performing in front of him, represents his family through his daughter and he now realises that this is all he wants and he really doesn’t need anything else. Its also irony when he sings this whilst not realising the deeper meaning behind this, but of course he does realise this at the end of the film. And that this song encourages people to believe in the impossible as the song expresses how the impossible can come true ‘there right in front of you’ and this makes this song not only a good thing for those aspiring for greatness to hear, but also for children especially who might aspire for something great.

Another song that is particularly significant is the song ‘a million dreams’ as it not only appeals to children through its lyrics but also that is even sang by children and this is what could even bring out the child in adults. The lyrics “a million dreams for the world we’re gonna make” are the strongest lyrics of this song as it shows that the world is what you make it to be and what you aspire to be in that world is what can change it, and I think that is definitely what makes it stand out as a song, and its what makes the film itself a very nice family one through all songs such as this. One of the final ones that I quite liked was one of the last ones that seemed to more appeal to older men as it is a song of reflection on the past and of course, older men will have memories of their lives and that Hugh Jackman’s character is reflecting on his life may encourage any older viewers to reflect on their lives positively, or if they look back on theirs negatively maybe it would convince them to do something they can be proud of themselves for, in that sense its what makes this song in particular, also a strong one.

One of the other great simple things about this film is that it is so appealing to any typical family, there are certain aspects of the film that will either interest some, and therefore encourage them to keep watching the film, or engage them through the strong emotions conveyed through such brilliant singers, one of the most notable ones, of course, being Hugh Jackman. And family in itself is a theme as, as I mentioned earlier, the group of people that B.T Barnum brought together, became a family, and that in itself makes the film relatable as of course, a typical family has many differences throughout each member, much like this group does, it is simply the togetherness that makes them work well together as well as the strong connection in which they comfort each other, much like these people do after Barnum ‘shuts them out’ to go and try to make even more money. And of course then there’s Barnum’s blood family that is his wife and his two daughters, and the daughters making the film appealing to young girls through the stories that Barnum tells them and the wishes that they make. And of course the songs that they sing together which may even encourage them to become singers themselves, personally I think the film would have been better off if Barnum had a boy and a girl in the film, I’m not entirely sure if this was the case in real life but it wouldn’t matter two much if they changed this one thing as similar things have been done before in order to receive a larger audience range, such as in the Goldbergs TV show.

Overall, the message of this film, for me, is to aspire for happiness and not necessarily greatness, as sometimes you will end up sacrificing one for the other, either losing the happiness in yourself or the happiness or others.