Film - Valerian and the City of A Thousand Planets 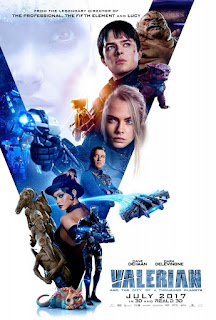 Susan Omand finally gets round to watching the latest film from her favourite director, Luc Besson's Valerian and the City of A Thousand Planets...

When Rihanna isn’t the worst casting choice in your film you have a problem. I know, I know. Every other article/post/whinge about the film that you will have read has gone on and on (and on and on) about the hideous errors in casting Dane DeHaan and Cara Delevingne in the lead roles and I have to agree. They don’t fit the source material (according to the comics he is a square jawed, by-the-book soldier who is a bit of a “shoot now ask questions later type” from the 28th century, she is an 11th century red headed French peasant girl that got swept up in a Doctor Who style timey-wimey companion way), but they also don’t fit their own characters within the grand scheme of things as laid out by the film (which I can accept wanted to, ironically, modernise them a bit) and they sure as hell don’t have any chemistry with each other as a team, romantic or otherwise. To be honest, their acting isn’t awful, they hit their marks and delivered their lines and kept the plot going, but it just didn’t work for me, it was a bit devoid of, well, anything really and that’s all I’m going to say on that matter.

Those two aside though, I loved the film! Firstly, it looks GORGEOUS. The special effects were absolutely stunning, the space scenes were epic, the city scenes even moreso. From the sweeping vistas, to the tiniest detail, it just pulled you in and held you rapt to the screen. I loved the concept of the Big Market near the start that you can only see through special goggles, otherwise it looks like you’re standing in the middle of a huge desert and the separate zones on the space station all had their own characteristics, there was nothing generic about them. The story too was actually great fun! Pretty simple as plots go, yes, but swashbuckling action and adventure of the over-the-top kind that you’d find in the Star Wars or Indiana Jones films. However you could tell that it was Besson and not Spielberg behind Valerian, both as screenwriter and director, because the film had Besson’s signature deftness of touch that gave it that special French feel - you'll know what I mean if you've watched other French cinema. The humour had his oblique dry wit, the violence was suitably “graphic novel” in its graphic-ness and the incidental characters and species were utterly wonderful, adding a real richness to the environments. Talking of whom, the cameos were absolutely superb! Yes, even Rihanna who, after her... umm... interesting pole dance, really gave her character a personality that made you want to root for her. Add to that Ethan Hawke out-Depp-ing Johnny Depp as her cowboy/pirate/pimp/club owner, Herbie Hancock scowling through the monitors as the Defense Minister and the legend that is Rutger Hauer as the President of the World (ok World Federation but... yeah, World really) and, lead characters aside, the casting is really cool. And that’s before we get to the magnificence of Clive Owen as the Commander – but I don’t want to spoil the story.

So do your best to get past the casting of the leads (it IS possible and didn’t spoil the film at all for me when I stopped worrying about how much better they could have been if they had been somebody else and just went with it), realise that you’re going to get a film that is massively style over substance and just spend a couple of hours with your intellect switched off and your imagination switched on and you’ll love it.