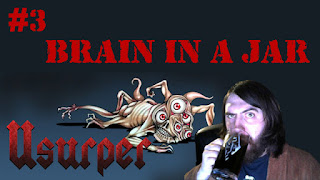 The Defective Inspector discovers what the vitae was for in Part 3 of his Let's Play of Usurper, currently on early release from Pugware...

This time on Usurper the Defective Inspector finds himself out of his league, gets followed by a brain in a jar and says "skidoosh."