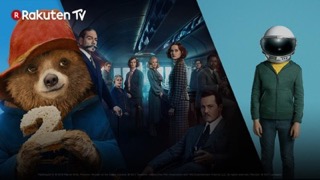 With a mix of big name blockbusters and festival favourites, Rakuten TV have announced the launch of their March 2018 slate...

Rakuten TV is proud to announce that Oscar nominee and front runner for Best Foreign Language Film, A Fantastic Woman, will arrive on Rakuten TV day-and-date with its theatrical release on March 2nd, living up to the Rakuten TV promise of bringing the best cinema directly into your home. This is a huge coup for the streaming service and in keeping with their main goal, to shorten the window between theatrical and home entertainment.

A Fantastic Woman, sees Marina, a waitress who moonlights as a nightclub singer, bowled over by the death of her older boyfriend and brought into question over her involvement in his death. As a transgender woman, their unconventional relationship and her right to mourn her beloved deceased is called into question.

March also sees a variety of exciting new arrivals on Rakuten TV, from some of 2017’s most critically acclaimed movies through to massive blockbuster spectacles and fun-filled family favourites including the hugely successful Paddington 2. The much-loved and widely acclaimed sequel arrives on Rakuten TV March 5th, for all the family to enjoy. A Paddington boxset which includes both movies will also be available from 5th March at £14.99.

Arthouse and world cinema fans will also be pleased to see that indie director Yorgos Lanthimos’s darkly eerie award-winning The Killing of a Sacred Deer will be available to stream from March 5th. Starring Colin Farrell and Nicole Kidman, the film has garnered praise amongst the critics since its debut on the festival circuit last year.

Alongside this host of acclaimed movies, March will also see the hot awards contender The Florida Project, available from 5th March, the movie has been praised by critics and audiences alike, with Empire calling it “a moving, emotional masterpiece”.

The following week, superhero fans can get their fix of blockbuster action with the much-anticipated DC superhero ensemble pic, Justice League, which make its way onto Rakuten screens from March 12th. The epic team-up movie features an all-star cast of characters including Superman, Batman, Wonder Woman, The Flash, Aquaman and Cyborg. As part of an exclusive early bird offer, Justice League will be available to own at £5.99/£6.99 (SD/HD) between the 12th – 26th March.

In addition to the highly-regarded family favourite Paddington 2, Rakuten TV will also release Daddy’s Home 2, available to watch from 13th March, the sequel see’s Mel Gibson and John Lithgow join the cast as the fathers of Mark Wahlberg and Will Ferrell. Daddy Home 2 will also be available to own as part of an early bird offer at £5.99/£6.99 (SD/HD) from 13th – 19th March.

Looking towards April, there will be new and exclusive 4K HDR content made available through the service. Starting with the 40th anniversary re-release of the iconic Grease, this much-loved classic will be made available on Rakuten TV to stream in stunning remastered 4K HDR quality before any other platform.

April will also see former Vice President Al Gore’s sequel to his award winning documentary, An Inconvenient Truth released. The new doc, An Inconvenient Sequel: Truth to Power, will also be available in stunning 4K HDR and sees Mr. Gore continue his tireless fight, traveling around the world to train an army of activists and influence international climate policy.


19th March
Battle of the Sexes - Watch a Clip HERE