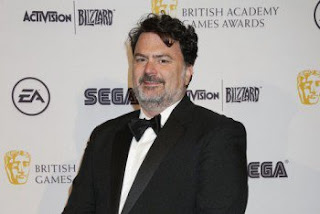 Hot on the heels of their Film Awards, BAFTA have announced the recipient of this year's Fellowship for Gaming...

Tim Schafer, the renowned designer best known for the LucasArts cult classics Full Throttle, Day of the Tentacle and Grim Fandango, and more recently for his work at Double Fine, will be presented with the Fellowship at the British Academy Games Awards on Thursday 12th April 2018 in recognition of his creative contribution to the industry.

Tim Schafer said of his award, “I am surprised, humbled, and honored to be receiving the BAFTA Fellowship this year. BAFTA's long-standing support of video games and championing of creativity and strong storytelling in that medium, have had an extremely positive impact and I'm very grateful to be recognized by them with this Fellowship.”

The Fellowship is the highest accolade bestowed by BAFTA upon an individual in recognition of an outstanding and exceptional contribution to film, games or television. Fellowships previously presented for outstanding work in games include John Carmack, David Braben OBE, Rockstar Games, Gabe Newell, Peter Molyneux, Shigeru Miyamoto and Will Wright.

Amanda Berry OBE, Chief Executive of BAFTA, said “Tim Schafer is a true pioneer of game design, who has pushed the boundaries of the medium through his extraordinary talents. With a career spanning three decades, his diverse body of work includes some of the most iconic and best-loved adventure games, all characterised by his powerful storytelling and distinctive comedic writing style. We are honoured to be presenting him with the BAFTA Fellowship.”

Tim Schafer is a revered designer within the games industry. He is best known for his work at LucasArts, which he joined in 1989. He first worked as an assistant designer, alongside Ron Gilbert and Dave Grossman, on The Secret of Monkey Island (1990) and Monkey Island 2: LeChuck's Revenge (1991).

In his first lead role on a game project, Schafer co-designed with Dave Grossman Day of the Tentacle in 1993, a time-travel comedy adventure and the sequel to Ron Gilbert's Maniac Mansion. Schafer's first solo project, the biker adventure Full Throttle, was released in 1995. Tim Schafer then went on to design the critically acclaimed Grim Fandango in 1998, a noir adventure game set in the Aztec afterlife.

After leaving LucasArts, he founded Double Fine Productions in 2000, where he led on creation of BAFTA-winning platformer Psychonauts (2006). In 2009 Schafer designedBrutal Legend, which received a BAFTA nomination for Story in 2010. Tim Schafer crowdfunded his first adventure game since Grim Fandango, called Broken Age, on Kickstarter and more than tripled the $400,000 target in 24 hours. The BAFTA-nominated title remains one of the most successful crowdfunded games projects on the platform.

In 2015 he set up the crowdfunding platform Fig, a curated version of Kickstarter specifically for games projects. Schafer and Double Fine have continued to champion independent development, both through the Day of the Devs events and Double Fine’s annual Amnesia Fortnight, where the team are encouraged to down tools and work on new game concepts.

The British Academy Games Awards will take place on Thursday 12th April at the Troxy, London. Nominations will be announced on Thursday 15th March.