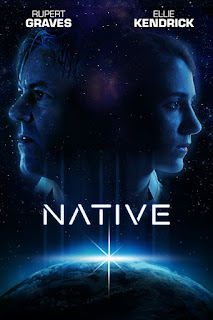 Out now on Digital and in select cinemas, Ren Zelen doesn't need a telepathic link to watch the indie sci-fi Native...

First screened at the 2016 Boston Sci-Fi Film Festival, Native is a science fiction feature directed by Daniel Fitzsimmons, from a screenplay he co-wrote with Neil Atkinson.

Much of the action takes place on a spaceship crewed by two scientist-pilots, Cane (Rupert Graves) and Eva (Ellie Kendrick) who have been selected to travel a huge distance across the universe in pursuit of a remote transmission which appears to have been relayed by a source of intelligent life.

The transmission takes the form of classical music, (Beethoven’s Fifth) which is an invention that the travellers’ own civilization is unfamiliar with, in fact, they seem to be unfamiliar with any kind of fine art.

Cane and Eva come from a people who are party to a ‘hive mind’ and share especially strong telepathic bonds with certain partners (whom they call ‘twins’). These telepathic communications can span across the universe, and so enable immediate contact with mission control back on their home planet.

When Cane's partner Awan (Leanne Best) suffers a tragic fate, communication between his lifelong partner and his home planet is abruptly cut off. He is left isolated and bereft, as he has never before been alone and mentally apart.

Eva can also tune in to Cane’s thoughts, but she can barely fathom the effect that such a sudden severance has on his mind. As time passes, she finds that Cane is also distancing himself from her and becoming uncharacteristically jealous of his privacy.

He becomes obsessed with the musical transmission, the civilization that sent it, and what it might be trying to communicate. He begins to spend time on creative pursuits which are atypical of their homeworld and are considered irrelevant to the mission.

Eva's own telepathic partner Seth (Joe Macaulay) back on her home planet, conveys the homeworld’s perplexity regarding Cane’s behaviour. They offer confused and conflicting advice – they suggest that Eva should get closer to her shipmate and tune in to his thought processes, while also observing and reporting on him.

People on his home planet are troubled by Cane’s increasing understanding of and empathy with, the civilization they are heading to, and consider it to be dangerous to the mission, which is now revealed to be one of destruction and occupation, while Cane himself is driven to despair by his exclusion.

Without the use of prosthetics or make-up, Fitzsimmons and co-writer Atkinson present the ‘alien’ aspects of their protagonists within their script. This is done fairly efficiently, by peppering the dialogue with references to the different values, family structures, technology and societal customs of the alien civilization. They also manage to maintain a balance between aspects of Cane and Eva’s ‘alien-ness’ and elements of their personalities that we can still empathise with.

In seeking to make these aliens sympathetic, the casting of Rupert Graves and Ellie Kendrick proves to be a good fit. These are experienced actors who raise the calibre of what is a low-budget sci-fi, by making the relationship between their characters central to the story.

Graves’s Cane is grief-stricken, lost and teetering on the edge of a breakdown due to his increasing dissociation from his compatriots and their lack of understanding. If Cane is stumbling toward self- awareness, individuality and burgeoning creativity, Kendrick portrays Eva with a concerned bewilderment and fear when confronted by his estrangement.

Kendrick's character of Eva shows, by contrast, one who is ‘under control’. She remains in unbroken contact with ‘the hive’ and diligently devoted to her task. She still manages to infer how one can be part of a larger network without being an automaton, and how ultimately, one must make an individual choice.

Graves and Kendrick experience also allows them to be comfortable with how the film often embraces the qualities of a stage production. For much of Native, the costumes, set decoration, are minimal and understated. This actually helps the viewer to better focus on the universal aspects of the story.

Native’s slow-burn mood and minimalist aspects may not make it popular with sci-fi fans who have grown used to spectacle over story, but for the sci-fi fans who value ideas and a more thoughtful approach, Fitzsimmons’s priorities should make the film a fairly rewarding viewing experience.