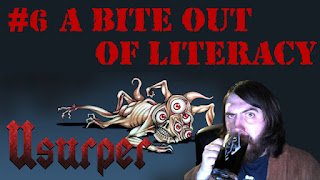 The Defective Inspector kills all the books in part 6 of his Let's Play video for Usurper, currently on early release from Pugware...

"And I land delicately like a graceful moth upon a wilted leaf..."

This time on Usurper, the Defective Inspector defeats the book monster, curls his moustache like a 1920's train conductor and laughs hahaha in the face of humiliation (no, we don't know either).