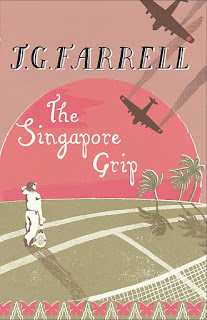 Adapted from Booker Prize winner J.G. Farrell’s novel by Oscar winning screenwriter and playwright Christopher Hampton, The Singapore Grip is an epic story set during World War Two, centring on a British family living in Singapore at the time of the Japanese invasion.

Singapore, 1941. Rubber merchant Walter Blackett, his wife Sylvia, ruthless daughter Joan and spoilt son Monty live a life of luxury, seemingly untouched by the troubles in Europe. With Walter’s business partner Mr Webb’s health failing, Walter needs to ensure that the future of their firm is secure. He decides that Webb’s son Matthew is the perfect match for Joan, and Joan is happy to agree, but Matthew’s idealism leaves Walter increasingly suspicious as Matthew himself falls under the spell of Vera Chiang, a mysterious Chinese refugee…

J.G. Farrell (1935 – 1979) wrote the Empire Trilogy of novels: Troubles (1970), The Siege of Krishnapur (1973) and The Singapore Grip (1978) all of which dealt with different facets of colonial rule. He received the Booker Prize in 1973, and was retrospectively awarded the Lost Man Booker Prize in 2010. He died aged 44, drowning on the coast of County Cork while fishing.

The book is being adapted for the screen by the multi-award winning writer Christopher Hampton, who worked on films such as A Dangerous Method, Atonement, The Quiet American, Carrington (which he also directed) and Dangerous Liaisons, for which he won the Oscar, as well as many theatre and musical productions. Of this adaptation he said, “As a great admirer and, eventually, a friend of J.G.Farrell, I was delighted to be invited to adapt The Singapore Grip, a panoramic account of the disastrous loss of Singapore to the Japanese invaders in 1942. Close analysis of this great novel has only deepened my enthusiasm for the skill with which Farrell has combined the private story of the machinations, commercial and amorous, of the Blackett family and their struggle - described with Farrell’s trademark subversive wit - to preserve and expand their prosperous rubber business with the unfolding of the cataclysmic events to which they remain totally oblivious until it’s too late. Matthew Webb, our bespectacled protagonist, an idealistic innocent abroad, lands in the middle of all this, to find himself fiercely pursued by two beautiful women - an English heiress and a Chinese adventurer - and his story, with its tumultuous backdrop, is told in a style with echoes of Tolstoy and Evelyn Waugh, but still, unmistakably, the unique voice of Jim Farrell.”

Executive Producer Damien Timmer added "For me, J.G. Farrell and Christopher Hampton is the absolute dream team – two of the finest writers this country has ever produced. Forty years after it was first written, bringing The Singapore Grip to the screen is a passion project for all of us. It’s an exceptionally well-crafted novel which has been adapted with unique flair and mischief by Christopher. It’s a privilege to be making this for ITV, and we hope this hugely ambitious and exotic saga will be a memorable treat for the audience.”

The series will shoot in the Far East this autumn.