Comedy Day - A Bit of Fry and Laurie 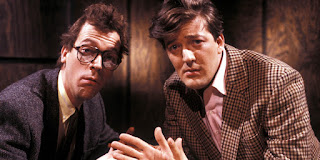 Tony Cross looks back with fondness at Hugh Laurie and Stephen Fry's sketch show A Bit of Fry & Laurie...

For all that Stephen Fry and Hugh Laurie have done since A Bit of Fry & Laurie it will be this sketch show that I will remember them most fondly for, which I suspect would annoy both in different ways.

This was the first sketch show I remember watching and absolutely falling in love with. It combined silliness with satire, it was replete with fantastically clever word play. It had regular characters that you waited for fondly, particularly John and Peter the two business men whose battles against Marjorie were fought with a ridiculous level of seriousness considering the minor prizes they were fighting for. There was Control and Tony, the spies whose whole sketch was based on the Alec Guinness ‘Tinker, Tailor, Soldier, Spy’. There were the two critics who seemed to be Fry and Laurie’s dislike of critics in human form.

Clearly influenced by Monty Python – the vox-pops, the fourth wall breaking and the verbal jiggery-pokery particularly - and Not the Nine O’clock News it was the late-eighties/early-nineties best sketch show. The quality of the sketches was high. The performances superb. No one takes a fake punch better and more hilariously than Hugh Laurie. No one waffles quite so wonderfully than Stephen Fry. Indeed, the public perceptions of both men might have been set by this series more than anything else, until Hugh Laurie shook it all off because of ‘House’. But the Stephen Fry of Fry & Laurie seems to be an exaggerated version of the real Stephen Fry (without the self-doubt.)

It's also got a bit of political humour too, which has come back into fashion in the ugly 2010s. The ones I remember best are the sketch about the privatisation of the police and what the SAS are mainly used for. Rhodes Boyson, the probably now forgotten mutton-chopped MP who worked as Under-Secretary of State at the Department of Education and Science, gets a well-deserved kicking for his horrible use of language (and terrible policies). But I’d never remember the series as political.

There was Hugh Laurie’s singing, to which Stephen Fry often responded in a hostile manner. This includes ‘Song for America’, which is lyrical genius – go look it up on YouTube, ‘Protest Song’ (which is a fine piss-take of Dylanesque protest songs), ‘I’m in love with Steffi Graff’ and ‘Mystery’, which is just funny. Hugh Laurie can play. Oh, and there’s an incredibly silly version of ‘Hey Jude’ that I have fond memories of. This might be a Brentford Football Club thing, but now is not the time or place for discussion of football.

But it is the perfect place to talk about their superb mockery of English cricket commentary, which starts gently before building up to something almost orgasmic.

However, I don’t want this just to be one of those lists of great sketches. What I do want is to convince you that whatever Fry and Laurie have done since ‘A Bit of Fry and Laurie’ it is worth going back to this sketch show. Across its four seasons or twenty-six episodes (depending on how you count) it delivered quality amusement. Today twenty-six half-an-hour episodes is a mere couple of nights entertainment via DVD (as I’m not sure it is online anywhere, which someone somewhere should do something about.

So, put on your best television watching outfit, slide the DVD into the DVD player or drive and settle back to be entertained by two young-ish men before they became superstars. See Hugh Laurie test out his American accent, see Stephen Fry go mad with vocabulary and just have some good, clean fun.

One day you can thank me for it.