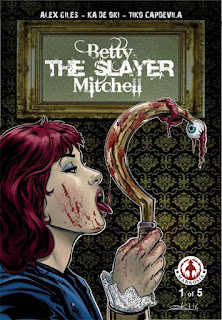 Susan Omand heads for home as she reads Betty "The Slayer" Mitchell #1 thanks to Alex Giles...

The easiest way to get my attention with a new comic series is to take my favourite Victorian urban myth of Springheel Jack and set it in my home town of Aberdeen. But I’m afraid every other comics creator out there trying to capture my attention is now going to have to find the second easiest way because Alex Giles has already nabbed this idea for the start of Betty "The Slayer" Mitchell in the first of a five issue series of comics from Markosia.

So Springheel Jack wreaks havoc in Springhill Gardens (yes, I wanted to call him Springhill Jack at that point too) and it’s up to Betty “The Slayer” Mitchell to return to Aberdeen, which seems to be her home town too – only the best etc – to put paid to the beast. However, this is not the first time that she has met with Mr Jack, as it was a run in with him that caused her to take up monster slaying in the first place. This time, with her new assistant Ronald in tow, she seeks out Springheel/hill Jack again and quickly and very messily gets her revenge. You’d think that was the end of the story but oh no, we’re not even 10 pages in before Betty and Ronald are off on their travels again, this time crossing the Atlantic to deal with the Jersey Devil with the help of none other than Nikola Tesla…

This comic certainly doesn’t hang about. With not one but two main monsters facing the wrath of Betty the Slayer, there’s little let up in the pacing. It’s understandable though that Alex wouldn’t want to fall into the trap of too much character building in issue 1 as this definitely would slow down on the action but, as long as it didn’t become full-on exposition, a little explanation of who Ronald, and the mystery man in the bowler hat who introduces them, actually are to Betty as it’s bothering me. What’s not bothering me though is the artwork which, even with Betty’s breeches seeming slightly too snug to be comfortable, is fantastic. I recognised the notable buildings of the Aberdeen skyline, like The Town House clock tower, and that kind of detail really helped to engage me with the rest of the story. And I loved both the visual look and the coolly detached attitude of Betty (even though the name reminds me slightly too much of another Slayer) and it would be interesting to see how her character rounds out, figuratively speaking, as the series continues. Especially because of her comments just before leaving Aberdeen where she questions whether she enjoys her work too much and does that make her as much of a monster.

So, all in all, a good start to what could become a fun series of comics. Hopefully the story arc will grow enough and the pacing will slow enough that it doesn’t become an I Spy book of dismembered monsters but I’m certainly intrigued to see where the Slayer goes from here.

The five issues will be coming out over the rest of 2018 and early 2019 in digital format with a trade paperback being released on completion of the story.

Find Betty the Slayer #1 on Comixology