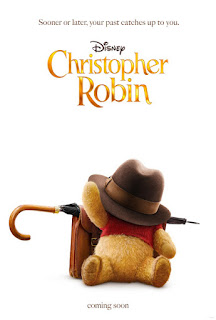 The young boy who embarked on countless adventures in the Hundred Acre Wood with his band of spirited and lovable stuffed animals has grown up and lost his way. Now it is up to his childhood friends to venture into our world and help Christopher Robin remember the loving and playful boy who is still inside.

Disney’s Christopher Robin is directed by Marc Forster from a screenplay by Alex Ross Perry and Allison Schroeder and a story by Perry based on characters created by A.A. Milne. The producers are Brigham Taylor and Kristin Burr with Renée Wolfe and Jeremy Johns serving as executive producers.

The film stars Ewan McGregor as Christopher Robin; Hayley Atwell as his wife, Evelyn; Bronte Carmichael as his daughter, Madeline; and Mark Gatiss as Keith Winslow, Robin’s boss. The film also features the voices of Jim Cummings as Winnie the Pooh, Chris O’Dowd as Tigger, Brad Garrett as Eeyore, Toby Jones as Owl, Nick Mohammed as Piglet, Peter Capaldi as Rabbit and Sophie Okonedo as Kanga.

Hang on... so Obi Wan Kenobi and Agent Carter are married and Mycroft Holmes is Kenobi's boss. But Obi Wan is struggling with the current world so needs help from the real Winnie the Pooh, Roy from the IT Crowd, The Twelfth Doctor and his friends from a previous regeneration to recapture his youth? Yeah ok. We can do that.  Watch the trailer.