Doctor Who - Delta and the Bannermen 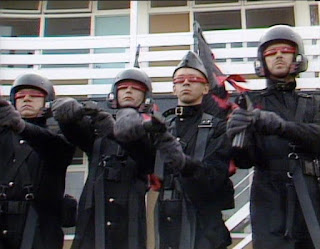 Our Doctor Who expert, Tony Cross, is journeying through all of time and space to bring us his thoughts on every available Doctor story. Today is the Seventh Doctor adventure Delta and the Bannermen...

I'm sorry but that was pretty poor.*

I'm not sure what was worse: the script, most of the performances or Keff McCulloch's bloody soundtrack.

Filmed on locations - in quarries, car parks and at a holiday camp - it does at least avoid looking staggeringly cheap but I really found it to be the worst story of Season 24 so far, which in some people's eyes would probably make it the worst Doctor Who story ever.

In its favour, you have a nicely enigmatic performance from Hugh Lloyd as Geronwy, the Welsh beekeeper. Enigmatic enough for people to think there might be something of the Time Lord about him. Perhaps like Sherlock Holmes an elderly Time Lord has retired to the countryside to keep bees. Whether he's a Timelord or not it is a nice, non-showy performance.

Don Henderson - who I remember as Bulman more than anything else - is suitably grim and nasty as Gavrok, leader of the genocidal Bannermen but he does appear to have walked in from a darker and nastier story than this one as the rest of Delta doesn't really live up - or down - to the grimness of Gavrok.

This is one of the major problems with this story: tone. This is a story that begins with an attempted genocide. Even if it is genocide in a quarry. Whilst you can't expect Doctor Who to talk about genocide in the same tone as 'Schindler's List' the subject isn't really there to be used as a throwaway introduction to three episodes of hi-di-high jinks, a cross-species love story and some gratuitous zipping around on motorbikes.

Plus the Bannermen they are a pathetic bunch, apart from Gavrok with their tongues out 'roar' moment being a particularly embarrassing moment. You find yourself thinking, 'did I really see that'. And dismissing the whole thing hoping that you didn't. But you did. And the image will never leave you.

Delta (Belinda Mayne) is supposed to be the last survivor of a race wiped out by an army led by Gavrok but such is the lack of urgency and care that it doesn't feel that big a deal. When Gavrok's men blow up the Navarino bus, killing everyone on board we're supposed to be upset. Mel tries to be. But it is such a throwaway moment it doesn't mean anything. The single ruthless murder of the likeable - if incompetent - pilot Murray (Johnny Dennis) might have made the point better.

However, this is 'just' a run-around with - to misquote an old Pertwee story - genocide as a sideshow.

There's supposed to be a love story between Delta and Billy (David Kinder) but that too doesn't work for me. Partly because the only chemistry between the two actors is pretty inert (mainly I'm afraid because of the woodenness of Kinder's performance.) and partly because it - like the bee/Chimeron comparisons - are laid on with a large, cheesy trowel.

They also manage to upset the rather lovely Ray (Sara Griffiths) in the process. Ray's supposed to get over this because of the gift of a motorbike and sidecar. Perhaps she doesn't love him that much after all.

Maybe it is because it is only three episodes long but it feels under-worked. It is the first draft that due to desperation - or lack of care - got produced to fill in a gap.

I don't like being so down on this story because I like Sylvester's shot at the Doctor. Yes, he's less convincing when he does shouty stuff but I think that makes sense. The Doctor is always at his most impressive when making his threats quietly, rather than shouting and raving.

Sylvester is still finding his way a bit but there's some nice moments: his slight awkwardness when trying to comfort Ray and the scene with Billy where he says 'love isn't known for its rationality' for example.

I should also praise Richard Davies as Burton, who gives a solid performance as virtually the only 'ordinary' person in this story. His sword waving scene is wonderful. But on the other hand, you take an actor with the pedigree of Stubby Kaye and waste him in a minor role like Weissmuller. Or you hire Ken Dodd and just get him to Dodd about a bit before bumping him off. It's pretty poor use of good talent.

Perhaps that is why I don't like this story. It feels like a wasted opportunity and that inside Delta and the Bannermen is a good story struggling to get out. I reckon RTD might have been able to do it. It does feel like the poor first draft of one of his more 'romp' stories.

I stand by most of the above, although I enjoyed it much more on this re-watch. Some positives I should add include Bonnie Langford being good & Mel being given the best outfit she will wear all season. Sara Griffiths as Ray is excellent also & I found myself wondering how Season 24/25/26 would have panned out with her as a companion and not Ace. I give Keff's music a bit of a kicking above but actually, for most of this story, it works OK. It's also a pacey little story. Its three episodes flew by so I can't beat it up for that most unforgivable of Doctor Who sins: being boring.

Also, I think Sylvester is excellent in this story. I'm a bit faint praise in the first review but I think he's mostly fabulous in this. There are hints at him trying to bring something darker to his portrayal during his confrontation with Gavrok.

Fundamentally though this story fails because it is a total tonal mess. It's like someone made a film that's 'Son of Saul' intercut with the motorbike chase from 'The Great Escape'. You'd wonder what the hell they were playing at. Oh, and the relationship between Billy and Delta just really doesn't feel right. I also found myself thinking if the green 'men' we see being massacred at the beginning of Part One are male Chimerons is that what Billy's going to end up looking like? And there was a disturbing thought in my head that if Chimeron Queens are like Queen Bees then isn't Billy's job going to be mating with the new Chimeron Princess? Or does that Princess go off and form a colony of her own. If so how? If Billy's the only male they've got. And don't even get me started on the...Actually, I'll stop now. This is giving too much thought to something that really doesn't need that much thought.

To conclude: I enjoyed it, but it is still terrible.