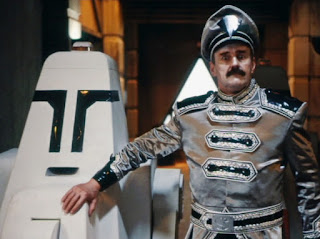 Our Doctor Who expert, Tony Cross, is journeying through all of time and space to bring us his thoughts on every available Doctor story. Today is the Seventh Doctor adventure Paradise Towers...

Paradise Towers isn't too bad a story. It even sniffs around the borders of being pretty good*. The fundamental idea is a Doctor Who twist on J G Ballard's 'High Rise' but with added Richard Briers. There's a large, impressive Tower block rotting away and deep in its basement something unpleasant and hungry lurks. Into this stumble our heroes Mel and the Doctor.

The main problem with this story is that it is unbalanced by two performances. The first is Bonnie Langford's. I'm trying not to repeat tired clichés about Bonnie Langford. I'm going to blame - as I did back in the Trial article - the team that created Mel in the first place and seemed content to make her a caricature of how Bonnie Langford is perceived to be. As a result, she's over-enthusiastic and over-theatrical. She's asked to do too much screaming and not enough acting. Accordingly played with Sylvester's quieter and more naturalistic Doctor she jars. Sorry, Bonnie. It doesn't help that in 'Paradise Towers' Mel seems both stupid and irrationally focused on going for a flipping swim.

In my head, I have this idea that in an alternative universe they still cast Bonnie but they made Mel a stronger character and gave her some proper guidance or direction. That alt-universe Mel doesn't get the same flak as the one in our universe. But enough of my weird theories.

The other odd performance is Richard Briers. Richard Briers is a bloody good actor and there are moments in 'Paradise Towers' where he shows that, especially when he's playing the rule-bound, still alive Chief Caretaker. Where I think it goes wrong is when he's playing the zombified, taken over by Kroagnon Chief Caretaker. At that point, he seems to be channelling one of Monty Python's Gumbys with all the subtlety and lack of threat that implies. To me, it looks like over-acting. And it doesn't make for a memorable villain.

That being said I like the society of Paradise Towers with its Kangs, Rezzies and Caretakers. The Kangs - called things like Bin Liner, Fire Escape etc. - are divided into gangs. There's Red, Blue and Yellow (although the last Yellow Kang bites the dust pretty early on) Kangs. They've got slang and attitude. I like the slang stuff. It makes Paradise Towers seem a more real place.

Elizabeth Spriggs and Brenda Bruce make Tabby and Tilda, two ostensibly sweet old ladies magnificently sinister, although Mel seems a rather skinny thing for them to be so excited about. Clive Merrison as the Deputy Chief Caretaker manages to underplay his part in contrast to Richard Briers and is all the better for it. One of my favourite scenes in the whole story is the Seventh Doctor's use of the Deputy-Caretaker's rulebook to out-manoeuvre his captors and escape.

Mention should be made of Howard Cooke who plays Pex. Pex is the one resident of Paradise Towers who doesn't really fit in. He's a coward who hid aboard a transport to Paradise Towers rather than accept his military service and pretends to be a heroic protector of the other occupants of the Tower. This pretence mainly seems to be aimed at himself as the rest of the population of the Tower seems to mock him. In the case of the Kangs directly to his face. Calling him a 'cowardly cutlet'. In chorus.

I've always found bullying gangs of chanting girls pretty sinister and there's a lot of that in 'Paradise Towers', mainly aimed at Pex. But in the end, Pex dies a hero's death and all is well with the Doctor Who universe. Oddly I felt a weird parallel between the way Pex is effectively bullied and shamed into being a martyr and the scene between Ian and the Thals in The Daleks where Ian demonstrates that despite their claims of pacifism there are some things that they will fight for. I know I'm taking this far too seriously but I feel a bit uncomfortable about the way Pex is treated in this story. It doesn't feel very Doctor Who-ish even if it seems heroic.

However despite my complaints, this isn't a bad story, it just isn't a great one. I hadn't watched it since the first broadcast back in 1987 so it was nice to have a few memories dusted off. I can't see myself rushing to watch it again soon.

So, having re-watched this I'm going to change some of the above. Firstly, Paradise Towers is actually a good story. Yes, there are issues re. production values, particularly the Cleaners. Alas, too many actors are reduced to throwing themselves at claws to make it look like the Cleaners are armed with deadly weapons.

It is also slightly over-lit. It could be really creepy if the lighting was less bright in the corridors. The first two minutes of Part One, as the Yellow Kang gets made 'unalive' is genuinely disturbing.

I still think Mel's obsession with swimming in the pool is borderline insane. I understand why she wants to get there as it is where she is supposed to meet the Doctor, but the desire to actually take a dip is bizarre, especially as she's just escaped death and seen people die. So, she's aware something terrible is happening but still wants to go for a swim. No. Please.

Also, Richard Briers isn't great in this, which is sad because he's really the only guest star that lets down the story. He's doing an 'it's just Doctor Who' performance and not taking it seriously, which means he looks totally 'off' in comparison with the rest of the cast. But it doesn't really get terrible until the final episode when he becomes the Kroagnon-Chief Caretaker. Then he just becomes a walking ham. It's annoying because this story is a couple of steps off of being a genuinely dark and creepy story. A genuinely terrifying Chief Caretaker in the final episode might have helped.

But the rest of the cast is rather good, which helps balance out the Briers problem. Also, I'd forgotten how good Sylvester McCoy is in this story. The way he runs rings around the Caretakers and their Rule Book should be a signature Seventh Doctor scene. You get the sense Sylvester is still trying to find his way to a performance he is happier with. Something dialled down and dark. He'll get there in the end but at the moment he's not really been allowed to.

So, to conclude notes from my re-watch Paradise Towers is an excellent story dented by a couple of performance issues and some traditional Classic Doctor Who production issues. I don't think I've changed my opinion quite so drastically on a story on re-watch.