Doctor Who - The Greatest Show in the Galaxy 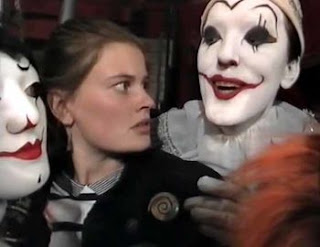 Our Doctor Who expert, Tony Cross, is journeying through all of time and space to bring us his thoughts on every available Doctor story. Today is the Seventh Doctor adventure  The Greatest Show in the Galaxy...

I was a little disappointed with 'The Greatest Show in the Galaxy' as I had fond memories of it from 1989. It is still pretty good, just not quite up to the standards of the first two stories of Season 25, although it is a significant improvement of 'Silver Nemesis'.

I think what I found mildly irritating was that the set-up of the story leads us to believe that a piece of intergalactic junk mail finds its way into the TARDIS and intrigues the Doctor enough to get them to go to Segonax to see it. Even if Ace clearly does not want to go because she's scared of clowns. However as the story plays out the implication is that this is the Seventh Doctor cleaning house again and is going after an enemy he's fought several times, 'The Gods of Ragnorok'. There's no explanation about what these creatures are. There's no explanation as to why they hijacked a pretty harmless hippy circus and turned it into a killing zone. Oh there's much talk of 'entertainment' but it is all a bit of a flimsy premise on which to hang the story really.

Yes, I'm aware there's a subtle satire on Doctor Who itself going on here. Gian Sammarco's Whizz Kid being an unsubtle piss take of a Doctor Who geek with his talk of 'not having seen it in the olden days but it was better then'. And perhaps you can take it further and see The Gods of Ragnorok themselves as the viewers with the Circus representing the BBC but all that gets us is an extra layer that amuses rather than adds anything to the plot.

However having said that this story does have an atmosphere of creepiness that works in its favour. The clowns truly are sinister, although they were created just to entertain by Bellboy (Christopher Guard). Bellboy may be the most tragic character in Doctor Who history. He's broken by what the Circus has become even before he discovers that Flower Child (Dee Sadler) has died. He's an emotional wreck. His memory has gone or been taken from him. He's played with absolute conviction by Christopher Guard to and his suicide at the hands of his own creations is truly desperate and sad.

It made me realise that if you hadn't balance out some of this story with the lighter stuff it would have been as dark and terrible as to be virtually not broadcastable. So whilst Nord (Daniel Peacock), Whizz Kid and the Stallslady (a fantastically grumpy Peggy Mount) are all slightly silly in their own way they do cast a bit of light on the shadows.

After all this is a Circus where everyone's skills have become twisted. The Ringmaster (Ricco Ross) raps people to their doom, Flower Child's kites have become hunters of the escaped and Ian Reddington's Chief Clown is the worst of them all. Both Bellboy and Deadbeat/Kingpin (Chris Jury) mention that he was a great clown once but now he's a terrifying figure and Reddington really makes the most out of the part. They had such high ideals and now they're fronting for a trio of murderous 'Gods'. How can that not be a tragedy? How can that not seem incredibly bleak?

So you add someone like Captain Cook (T P McKenna) who is an intergalactic explorer. He's played for laughs to start off with positioned as a crushing bore and a coward but all he's willing to sacrifice everything and everyone for a slice of power. The buffoon turns out to be a bastard. His companion, Mags (Jessica Martin) turns out to be a slavering were thing from the planet Vulpana and for once the make-up is pretty good.

Sylvester isn't too bad in this. Good in the quiet moments, less good in the shouty ones and his walk away from the exploding Circus entrance is possibly one of the Doctor's coolest moments ever. Not a flinch. But I think it is Ace who is best in this. Frightened, but covering it up. Pushed into getting involved by the Doctor himself - a slight hint of cruelty there from the Seventh Doctor, especially if he's got this whole thing planned all along. In 'Silver Nemesis' he was suggesting she go back to the TARDIS in a concerned manner. Here he's one step away from making those 'cluck, cluck' noises kids make as part of playground taunts. It just does not feel quite right, although it will turn out to be a taster for Season 26, which is all about the Doctor's plans for Ace.

Season 25 has seen a deliberate attempt to reposition the Doctor as a darker, more mysterious figure. One with his own, alien motivations. Someone who might not be entirely trustworthy. It doesn't always work but it does make McCoy's Doctor more nuanced and interesting.

So in the end I enjoyed 'Greatest Show in the Galaxy' and it ain't bad but for me, after the heights of 'Remembrance of the Daleks' and 'The Happiness Patrol' it feels like a let-down, but I wonder whether that is the fault of my cheating memory.