Doctor Who - Remembrance of the Daleks 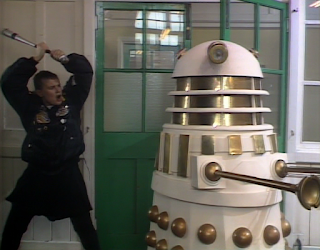 Our Doctor Who expert, Tony Cross, is journeying through all of time and space to bring us his thoughts on every available Doctor story. Today is the Seventh Doctor adventure Remembrance of the Daleks...

Well. Where the hell did that come from? After Season 24 you could be forgiven for expecting Season 25 not to be up to much. I know that I felt a sense of 'duty' about watching it but from that pre-credit sequence onwards you know things have changed.

There's no silly special guest appearances from inappropriate celebs. Every guest fits their parts to perfection: Pamela Salem as Dr Rachel Jensen who is Chief Scientific adviser to Group Captain 'Chunky' Gilmore (Simon Williams) are the two main 'guests' but able support comes from Dursley McLinden as Sgt Mike Smith - whose revelation as a traitor gives Sophie Aldred an exceptional scene. Other good support comes from Karen Gledhill as Allison and George Sewell as Ratcliffe, the British fascist.

There's no Bonnie Langford, which means Sophie Aldred is free to bring Ace properly to life and lose some of the slightly irritating qualities we saw in 'Dragonfire' and there are less 'wicked' here. Sophie and Sylvester (or Ace and the Seventh Doctor) have a brilliant chemistry and I think they're one of the best Doctor - Companion relationships in the series history. The aforementioned scenes with Mike are both fantastic. As is the scene when she - encouraged by the Doctor - explains why there are two factions of Daleks. It's so naturalistic it comes as something of a shock post-Langford.

Then there is McCoy himself. Here, given a quality script and quality direction, he is absolutely mint. For once the Doctor is proactive, rather than reactive. Here is the first attempt to return some mystery to the Doctor's character. Here is the Doctor ruthlessly destroying Skaro in order to end the Dalek menace once and for all.

McCoy is pretty convincing, especially in the smaller, quieter scenes: his discussion with Ace on the school steps; the 'sugar' conversation in the caff and the scene when he collects the coffin/Hand of Omega from the undertakers. I find that the more famous speech when he confronts Davros works slightly less well because McCoy is less convincing once he raises his voice. But for me the most Doctor-ish moment is in Part One when he just says 'Humans'. That's all.

It's a brilliant script by Ben Aaronovitch, which uses the Daleks to make points about racism and fascism whilst having a pretty straightforward plot told in a straightforward way. It also uses continuity in the right way. Yes, this story has loads of references to 'An Unearthly Child' but you don't need to be drowning in Doctor Who geekdom to follow the story. Compare and contrast how continuity is used in Remembrance with how it is used (or abused) in Attack of the Cybermen. It's a lesson for all future Doctor Who writers to take on board. Continuity adds depth but use it lightly.

It also features - at the end of Part One - the best cliff-hanger for bloody ages. The Doctor stumbles, Ace is beaten up & a Dalek rises up the stairs to kill the Doctor. Yes, the exterminates go on a bit too long but sod it that's how to do a bloody cliff-hanger.

It is aided by Andrew Morgan's fantastic direction. It is paced to perfection. It looks great to. As if someone somewhere actually decided to spend some cash - and time - on a Doctor Who story for a change. And it's got Michael Sheard in it for heaven's sake. How can you not love it?

This was the story that restored my jaded faith in Doctor Who and it was the story that - during the long, long hiatus - allowed me to keep saying to those of little faith that one day it would come back. O yes. If you are one of those people that has avoided Sylvester McCoy's era because you've swallowed the myth that it is all terrible then I'd start with this. It's effectively a total re-boot of the series. It's New Who before Russell T Davies. Ace is just Rose with worse dress sense and more explosives.

It's one of the best Doctor Who stories of all time: an ideal combination of script, performances, 'history' and direction and a total blast of wonderfulness to drown out memories of Season 24. Watch it. Watch it now.