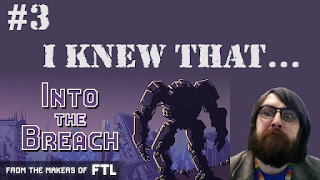 With unknown cataclysms and the ability to launch in two directions at once, it's part 3 of the Defective Inspector's Let's Play video for Into The Breach by Subset Games...

"I knew that. I planned that the entire time..."

This time on Into the Breach, the Defective Inspector uses the Titan Fist, eradicates all life and does a victory wave.