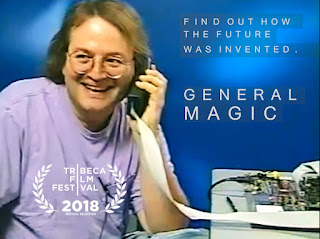 Spellbound Productions has announced that its new documentary General Magic will celebrate its World Premiere at Tribeca Film Festival 2018...

Directed and produced by Sarah Kerruish and Matt Maude, General Magic is a feature documentary about how great vision and epic failure changed the world as we now know it - from the smartphones that sit in our pockets to an array of technologies we now take for granted today.

Many of the ideas that now dominate the tech industry and our day-to-day lives were born in 1989 at a Silicon Valley startup no one has ever heard of - General Magic.

But this was before the Internet, before 3G, before Google, before most people had mobile phones. The world was not ready in 1995 to hold the world in its hands. Fierce competition, incredible hubris and heartbreaking betrayal dominated behind the scenes of General Magic. While some never recovered from the failure that accompanied its downfall and bankruptcy, others went on to soar. The lessons learnt at General Magic were instrumental in the creation of the iPod, iPhone, Android, eBay, even in the corridors of President Obama’s White House. And although General Magic died, those concepts and the people who pioneered them went on to change how the world connects today.

Described by Forbes as “The most important dead company in Silicon Valley” and combining rare archive footage with contemporary stories of the General Magicians today, this documentary tracks the progress of anytime, anywhere communication from a thing of sci-fi fiction to our modern day reality.

“Making this documentary has been an incredible and very long journey," said Sarah Kerruish. "Back in 1993 I was part of the team that filmed the early days of General Magic, one of Silicon Valley’s most exciting and secretive startups. It was easy to see then that this was a unique group of engineers and visionaries, but I don’t think anyone could have predicted the success and size of their collective impact on the world today. As a result, I became haunted and fascinated with the role of failure in bringing ideas to life and I hope this documentary will inspire anyone who is on that path."

Executive produced by Michael Stern, Reynold D’Silva and John Giannandrea, the documentary features members of the original Mac team and the creators of the iPhone, Android and eBay; designers, engineers and entrepreneurs who saw the future twenty years before it happened and help create the future we use today.

● Marc Porat - An incredible visionary who had the right idea but the wrong timing.
● Tony Fadell - The college kid turned co-inventor of iPod and iPhone, founder of Nest, inventor, designer, entrepreneur and angel investor currently heading up Future Shape.
● Andy Hertzfeld - One of the world’s greatest software engineers, member of the original Apple Macintosh team, co-founder of General Magic and co-creator of Google Circles.
● Megan Smith - Brilliant engineer, humanitarian, former VP at Google, Chief Technology Officer to the Obama Administration, co-founder of The Malala Fund and shift7.
● Joanna Hoffman - Member of the original Apple Macintosh team, Head of Marketing at General Magic and the woman who famously stood up to Steve Jobs.
● Kevin Lynch – Former CTO of Adobe, creator of Dreamweaver, lead engineer on Apple Watch and current VP of Technology at Apple.
● John Sculley - Former CEO of Apple (1983-1993)