Film - Beyond the Woods 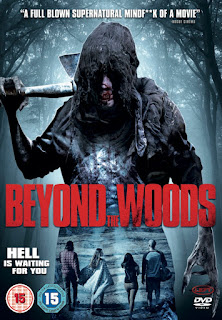 Out now on DVD and Digital, Ren Zelen discovers if it's the sweet smell of success or a bit of a stinker for Beyond the Woods...

I have a soft spot for Irish films, Ireland has always encouraged creativity and cultivated the arts. It demonstrates a love of words, of folklore and of the absurd, so, it was with some anticipation that I watched Beyond the Woods - the first full-length feature of writer/director Sean Breathnach.

The film begins as seven friends meet up in the Irish countryside for a weekend together in an isolated cottage - three couples and one single male friend who has recently split from his girlfriend.

Jason (Sean McGillicuddy) and Marissa (Ruth Hayes) are the couple at whose family cottage the action takes place. Ray (Mark Lawrence) is a workaholic and addicted to his phone. He’s constantly wandering off to get reception, much to the annoyance of his wife Lucy (Irene Kelleher). Shane (Ross Mac Mahon) and Emma (Claire J. Loy) initially appear as the most amenable couple, but their easy-going demeanour has a darker side. Singleton Ger (John Ryan Howard) is the nicest and most sensitive of a rather brash bunch.

As the guests arrive, they all remark on a vile odour that permeates the surroundings. Jason apologetically explains that this is due to a fiery sinkhole which has opened up in the mountains nearby, spreading burning hot sulphur, and this is casting a pall of hellishly stinking vapour over the woods where the cottage is located.

Now, confronted with what is described by all as a sickening and disgusting stench, most sensible people would abandon the idea of a jolly get-together in an isolated cottage with ‘horror-trope’ stamped all over it, and hightail it right back to the pub in the nearest town. This bunch however, seem determined to inflict themselves on each other for the whole weekend, despite any amount of nausea and discomfort.

'Well gosh, that's friendship!' you say – except, they don't actually seem to like each other very much, or in some cases, even know each other very well. So, to mitigate the ghastly smell, the assembled company start drinking from the moment they arrive, and, to ward off the increasing boredom of their conversation, they soon take to quaffing the hard stuff and indulging in soft drugs and the occasional line of coke. One can hardly blame them, there isn't much else doing and they all seem to be waiting for something to happen. 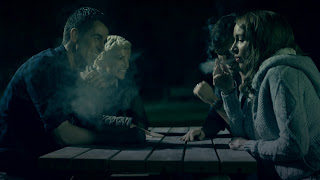 Soon the noxious vapours from the sinkhole have a malicious influence and begin to cause the inmates of the cottage to behave strangely – or so the publicity blurb says, but it’s not soon enough and it’s not really strangely enough, at least, not for a horror flick.

Some very irresponsible and ill-judged incidents do occur amongst a few of the not-very-close-knit group of 'friends', I don't wish to give out any spoilers, but these unseemly events really amount to nothing that could not be put down to their excessive imbibing of alcohol, a lax sense of propriety, and the imprudent indulgence in inhibition-releasing drugs.

However, some inconsiderate party keeps leaving trails of dirt and muck around the cottage when no-one is looking, and there does seem to be a watcher in the woods after dark, snuffling, growling and slobbering. Various members of the group wander outside (now apparently impervious to the vile stink) for smokes, more drinks and to indulge in mundane conversations about their relationships, and are observed by the nasty thing gurgling in the bushes.

"What malevolent force has crawled from the sinkhole?" asks the blurb - well something armed with an axe, wearing dirty, raggedy clothes and sporting a face like an incinerated, half-eaten chicken. It does make a good deal of unpleasant and impolite gibbering noises as it stalks around the garden, and also appears to emit a strobe light when it grabs people - flashy devil.

We learn that this creature from sm\hell is compelled to fulfil a particular task and it needs seven people to do it, conveniently, the exact number of the weekend guests at the cottage. The moral is, never ignore a nasty smell, it is only likely to get worse.

Beyond the Woods is a distinctly low-budget horror with some promising, if unoriginal, ideas. The film quickly gets frustrating, as we wait for it go somewhere with its plot. Instead, it spends too much time building relatively banal backstories to characters that are annoying and unsympathetic.

We hope these unlikable folks will receive retribution in imaginative ways, but the denouement feels rushed and the mayhem isn’t all that shocking, probably because the meagre budget doesn’t allow it. I can’t help wondering what Sean Breathnach might have done with a little more money to play with?