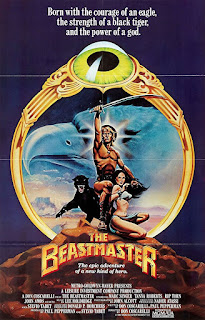 Our small band of Gunters here in The DreamCage universe are reviewing every film mentioned in Ernest Cline's Ready Player One. This week, Tony Cross turns his eagle-eye onto The Beastmaster...


I am going to put my cards on the table. The Beastmaster is trash, but it is entertaining trash. No one is ever going to be putting it down on a list of the Greatest Films Ever Made, but then again, The Godfather doesn’t have two polecat thieves called Podo and Kodo so it is swings and roundabouts. Oh, and SPOILERS. If you can have spoilers for a film made in 1982.

The Beastmaster is fantasy by numbers in many respects. Maax (Rip Torn) is an EVIL PRIEST. I’ve given him caps because that’s what the performance deserves. Torn uses his eyes and eyebrows to act the hell out of every scene. Anyway, EVIL PRIEST is going to sacrifice a child. That child is King Zed’s* child. So, obviously instead of murdering Maax where he stands Zed sends him away like a naughty schoolboy. Maax is aided by four evil witches. One more than Macbeth so perhaps one witchier is a thing. Oh, and in Macbeth style the Zed’s child is prophesied to kill Maax.

Witch steals baby by transferring it magically from wife to a cow, which is an impressive skill to have picked up. Witch kills cow and is about to kill baby when random farmer kills witch and rescues baby. Baby grows up in the village not knowing who he is or his destiny. Gets called Dar and grows up to be Marc Singer in a minimalist outfit who has developed an uncanny knack of being able to communicate with animals.

Talking of minimalist outfits moment to pause here to say that there is some minor gratuitous boob-showing in this film, but not as much as you’d expect. Indeed, whilst Kiri (Tanya Roberts) is dressed in an outfit not dissimilar to Leela** there aren’t too many gratuitous shots of her. Indeed, whilst her outfit is ‘daring’ both Marc Singer and John Amos, who plays Seth, wear equally ‘daring’ outfits. 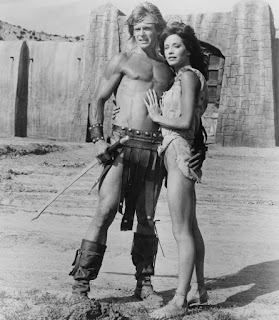 Dar’s village idyll is cut loose by an attack by the Juns. He is the only survivor. To show how barbaric the barbarian Juns are they even kill Dar’s heroic dog. The Juns are allied with Maax. Because obviously they are.

What follow is Dar’s gathering of friends both animal and human, including Tanya Robert’s slave girl Kiri and some creepy allies that are half-human, half-bird eaters of men. This man eating is done in a suitably gory style. This alliance will be important. The creatures aren’t given a name, but they are effectively sinister.

By the end of this process we have Dar, Kiri, Seth and Tal (Josh Milrad), King Zed’s youngest son. Plus, an eagle, a big cat and two polecats named Podo and Kodo.

There’s a rescue of King Zed, who turns out to be both physically blind and metaphorically blinded by hatred of Maax, which leads him into leading a failed attack on the Maax and a rescue. Maax dies with the whiff of ham floating about him.

Then come the Juns. But – spoiler alert – they lose, and the good guys win. Dar wonders off into the wilderness. Kiri joins him, and Tal becomes King unaware that Dar is the rightful heir.

So, there isn’t anything spectacularly original in here except possibly the nameless half-man, half-bird creatures but somehow it has enough energy and charm to be enjoyable as all hell. Marc Singer makes an effective lead. Tanya Roberts shows all the range required to be a Bond girl, which she will be in three years later in ‘A View to a Kill’ alongside Roger Moore. It will be contemplating the age gap between the two of them that finally makes Roger Moore decide to retire. John Amos is brilliant as Seth. It’s going to be a little weird watching him as Admiral Fitzwallace in The West Wing after this though.

There should be bonus points too for Podo and Kodo the two pole-cats, who feature in one extended sequence of their own that is a joy to watch.

Fundamentally this is just fun to watch. It’s got its tongue sufficiently in its cheek to avoid being far too serious for its own good without having the script or performances to carry it off, which was a bit of an issue with Hawk the Slayer.

So, if you’ve not seen this give it a go. I really enjoyed it.


*Honestly, the lack of imagination in naming here is glorious. Even down to Juns, which is clearly just Huns. We should be thankful that no one was called Ugg.

**Leela, in the unusual event of you reading this and not knowing, was a Doctor Who assistant in the late-70s played gloriously by Louise Jameson. She was one of my first crushes.