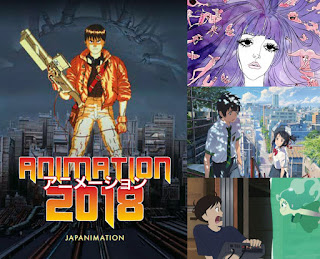 The BFI has announced the line-up for the BFI Anime Weekend 2018, taking place at BFI Southbank from Friday 18th – Sunday 20th May...

The Anime Weekend, which takes place at BFI Southbank every two years, showcases the best in recent anime to UK audiences. The weekend will offer another chance to see the critical and commercial hit Your Name (Makoto Shinkai, 2016), one of the most successful Japanese films of all time, which tells the story of two teenagers whose lives are changed forever when the first visible comet for a thousand years approaches Japan. Maquia: When the Promised Flower Blooms (Mari Okada, Toshiya Shinohara, 2018) is about a girl from a clan who stop ageing in their mid-teens; her life is destined to change forever when an army invades, searching for the clan’s secret to immortality. Also screening is Lu Over the Wall (Masaaki Yuasa, 2017), an off-beat and uplifting tale featuring Lu, a fun psychedelic mermaid, who loves music but is vulnerable to sunlight. In this Corner of the World (Sunao Katabuchi, 2016) is a sobering and positively moving anime depicting the effects of war on everyday communities; in 1944, young Suzu marries a military official and moves to Kure, the site of a major naval base. As she adjusts to her new life, Suzu, like her neighbours, must deal with rationing and air raids, and try to make the best of things.

Also included in the weekend are screenings of recent anime features such as Code Geass: Lelouch of the Rebellion I – Inititation (Goro Taniguchi, 2017) set in a world dominated by the Holy Empire of Britannia, where most of the globe has been conquered and forced into submission by a behemoth superpower. Japan, now renamed Area 11, harbours pockets of seemingly futile resistance. Enter an exiled Britannian prince with a deep hatred for the empire, who begins working as the faceless leader of Area 11’s resistance. Another fan favourite Eureka Seven, which originated as an anime series and inspired manga adaptations, video games and more, returns with a feature length anime for a new generation – Eureka Seven: Hi-Evolution Movie 1 (Hisatoshi Shimizu, 2017) is the first in a new trilogy of films that focuses on the ‘First Summer of Love’ phenomenon which occurred a decade before the original Eureka Seven series. Another beloved TV anime comes to the big screen in Cardcaptor Sakura Movie 2: The Sealed Card (Morio Asaka, 2000/2018) – during the summer holidays Sakura and her class prepare a play for an annual festival, but a new evil force is causing mysterious events all over her town, and Sakura must figure out the cause.

The BFI’s year-long season Animation 2018 also continues in May with screenings of classic Japanese anime films, from the very first anime feature, Momotaro’s Divine Sea Warriors (Mitsuyo Seo, 1944) which was thought lost for decades, to perhaps the most well-known anime of all time, Akira (Katsuhiro Otomo, 1988), which celebrates its 30th anniversary this year.

Although all copies were ordered to be destroyed by occupying forces, a copy of the WWII propaganda film Momotaro’s Divine Sea Warriors (Mitsuyo Seo, 1944) survived, and after being unseen for many decades has been restored. Considered to be the first anime feature film ever made, director Mitsuyo Seo drew inspiration from Disney’s Fantasia to tell the story of a young monkey, bear, puppy and pheasant who rise through the ranks of the animal navy to save Asia from Western colonisation. Unseen for many years until its recent restoration, Belladonna of Sadness (Eiichi Yamamoto, 1973) is an explicit revenge drama based on Jules Michelet’s book Satanism and Witchcraft. A feudal lord in the middle-ages commits a terrible crime against a couple of newlyweds in a harrowing, sexually violent story. Although the film is troubling, it remains a true anime classic, combining vivid watercolours with western artistic influences such as Gustav Klimt.

Katsuhiro Otomo’s seminal anime Akira (1988) – a striking, hyperkinetic adaptation of his own manga – almost single-handedly introduced the genre to audiences outside of Japan. In 2019, in a dazzling Neo-Tokyo, cyber-punk bikers cruise the Blade Runner-esque streets and do battle with military scientists and a telekinetic child. Impeccably detailed with fluid, jaw-dropping action, Akira remains a stunning cinematic achievement; the film will be screened on the biggest screen in the UK at the BFI IMAX, as well as at BFI Southbank.

Also screening is the last film from Perfect Blue director Satoshi Kon (who died four years after its release); Paprika (2006) is visually stunning and makes us only dream what anime’s equivalent of David Lynch might have gone on to make next. The family programme this month also includes Studio Ghibli favourites Spirited Away (Hayao Miyazaki, Kirk Wise, 2001), Princess Mononoke (Hayao Miyazaki, 1997) and My Neighbour Totoro (Hayao Miyazaki, 1988), providing audiences of all ages with an anime treat.