Our small band of Gunters here in The DreamCage universe are reviewing every film mentioned in Ernest Cline's Ready Player One. This time, the Defective Inspector investigates his most challenging case to date, Evil Dead (contains spoilers, gore and sandwiches)...

Now I just wrote an article about not judging the past by present standards, so I am in a tricky spot here. On the one hand I’ve been asked to review Evil Dead, on the other the movie has not aged all that well in many regards. My problem is I have never seen it, so I won’t have nostalgia to fall back on. But in the spirit of Ready Player One’s release I shall put my 80s helmet on a and try to recall why these movies are still cult classics to this day. I’m going to write this as I watch it, this could be fun!

Evil Dead starts like almost any other 80s horror movie, a group of kids do something stupid. In this case they are driving into the middle of the mountains to get away from it all and pay very little for the pleasure. Upon arriving at “Haunted Cabin X” the movie gives us a slowly building suspense by making fairly innocent, but notably strange, events occur. Clocks stopping and chiming at odd times and swinging benches bashing against walls only to suddenly stop act as simple but acceptable reminders this is a horror movie. Everything escalates very suddenly when the Necronomicon is discovered along with recordings of an unknown academic researching said book and its secrets. This lead to the artistic one of the group being tempted into the forest to be raped by a bush. 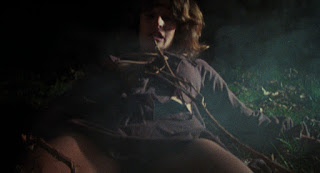 Woah hold on, I need to re-read what I just wrote. Yeah I did write that… Okay so… Woman is raped by a bush through some very questionable autonomous vines. Certifiably freaked out she breaks loose of the vines and then rushes back to the cabin and makes the most logical statement of the movie summarised as “get me the fuck outta here”. Strangely one of the members agreed presenting a level of logic I don’t expect in any horror movie, modern or classic, so I give a few bonus points here for Evil Dead 1. Obviously leaving is impossible, it would be a short movie otherwise, so they return to the cabin and suddenly everything gets interesting.

It seems being raped by a bush has given her the demon’s spirit. The spirit is unhappy with being awoken and decided to display itself as a floating undead corpse with a freshly unpleasant voice and attitude. It’s important to note this is the first time we see the undead in any form and our first gory attack happens where she stabs an Achilles Tendon and graphically blood pours out of it. I genuinely cringed watching it even knowing the leg was a fake. THAT is good 80s horror gore. It’s also at this point I acknowledge some tremendous backhand strikes from the demon-lady which are hilarious. She is eventually sealed in the basement and becomes an onlooker for a while. 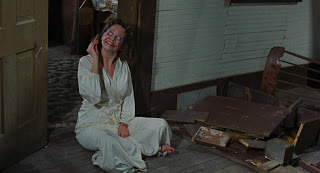 Shortly after we get another lady possessed by the Khandarian Demon and she (in order) scratches apart someone’s face, gets set on fire, is saved by fire, tries to eat someone, has her arm cut off, stabbed and then chopped apart by male protagonist 1. This entire scene is not shy about expelling liquids and so I felt eating would be an activity for another time. Male protagonist 2 asks the valued question “What are we going to do?” Hilariously the lumberjack worthy comrade recommends burying her… I feel like he hasn’t grasped the situation yet.

It wasn’t until this point I realised the characters seldom spoke their names, that is until a conversation between Scotty and Ash repeat it several times. Scotty being Male protagonist 1 and Ash being 2. Then there is sudden moment of realisation who this Ash is, and the relevance of a shotgun is looming on the horizon. Scotty rushed out of the cabin hoping to escape this hell while Ash inspects the leg-stabbed damsel in distress. We are introduced to the idea that the zombie infection is a thing and she turns into one very promptly. Scotty returns dementedly fearful of the trees, presumably due to his own sexual assault, and is greeted by all the possessed ladies cackling and mocking the living for trying to remain alive. 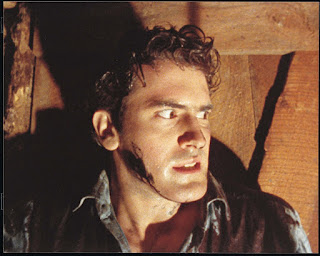 I’m about 50 minutes in now and I am starting to realise narrating this movie is borderline insane, everything is a free for all of madness, but I won’t pretend it isn’t entertaining. The newest zombie lady, who I think is Ash’s girlfriend, goes pure creepy by singing a song about him dying and then tries to stab him with the previously used dagger. Following continuity this leads to another beautiful zombie dagger work and more expulsion of liquids and thus my ham sandwich is placed in the fridge. Consistently the Khandarian Demon is rather clever, trying to trick Ash into false senses of security so that he can finish out the group if kids and… Go back to sleep? I can’t seem to follow the motive of the demon all that much, originally it was keen to remain asleep while now it’ll do anything to stay awake and murder the one last survive for unknown reasons. It also keeps demanding people to join it but to do what I am not sure. Die? Sleep? I have no idea. None the less the demon allows one of its victims to appear dead, get buried so it can jump scare us out of the grave, rip Ash’s legs apart and then get hit repeated with a wooden beam. Because… 80s.

Ash returns to the cabin after decapitating his lady friend with a spade only to find the cellar demon has broken free. This is when Ash FINALLY grabs himself a single-shot boomstick and now we enter familiar zombie hunting territory. He rushes down to the cellar to get himself more shells only for… Okay what the hell. For reasons not explained a cellar pipe is filled with blood, drenches Ash, then suddenly a projector plays, with ol’ timey music… Then blood pours out of light bulbs and wall sockets. I’ve completely lost the plot at this point, if there ever was one. But there is only 10 or so minutes of the movie left and Ash has the zombie hunter 5000 in his hand so perhaps the budget was being thrown about? 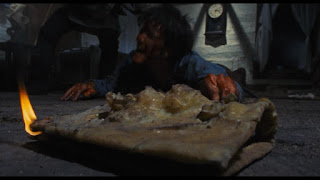 As Ash goes hunting for the final zombies of the day we watch him slowly lose his mind with moving clocks and mirrors that you can put your hand through. After a brief interaction with the cellar zombie Scotty decides now is the time to revive himself and gets his eyes finger stabbed open by Ashes over zealous blinding technique. The final rush of the movie involves Ash being struck repeatedly with an iron poker and the Necronomicon eventually being thrown into the firepit while Claymation corpses rot away. Ash gets one final jump scare and ANOTHER splatter of blood with the final utterance of “join us” is echoed throughout the house.

So how do I feel about this movie? It’s… Very 80s. The gore is over the top and the dialogue is pretty bad but for a horror movie of it’s time it was strangely entertaining. I grimaced at the blood effects, I laughed at the demented zombie taunts and I could follow some sort of plot from start to finish. I also have to give some big-ups to the make-up and special effects department as I really enjoyed some of the looks. Most notable was Ash’s girlfriend, she looked like a zombie Harley Quinn thing allowing her to be alive enough for Ash not to kill but odd enough that audience thinks she needs to die. It may have had moments of utter madness (tree rape, projector, blood pipe etc) but something about those moments kept me entertained. I can see how, despite some dated effects, this movie retains a charm I didn’t expect to see. I still need to watch Evil Dead 2 for TheDreamCage so I am looking forward to it. Maybe after I’ve eaten my sandwich though…

Images from IMDB and Wikipedia