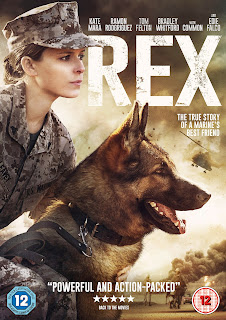 With spoilers from the start, Steve Taylor-Bryant gives us his thoughts on Rex...

After her best friend dies from a drug overdose after a night with her, Megan Leavey has pretty much given up on life. Can’t hold a job, can’t interact with others, a broken family she doesn’t get on with, all leads to Megan enlisting in the U.S. Marine Corps. During a drunken night out after pass out parade, Megan is caught relieving herself outside the Provost Marshall’s quarters and is punished by being given clean up duties in the dog pound. Deciding that the dogs are something she wants to work with inspires Megan to pass all her exams with top honours and eventually she is assigned to the dog handling, along the way mind you she had to be the human decoy the dogs attacked and spent lots of time training with a box on a leash. When the dog Rex, a scary German shepherd, breaks its aggressive handler's arm in six places with a bite, Megan is assigned to Rex and they get posted out to Iraq. Once in Iraq we see Rex and Megan checking vehicles and citizens at checkpoints, doing sweeps of houses and finding caches of weapons, and eventually we see an IED explosion and a firefight. Injured Megan is sent home where she decides to not re-enlist and wants to adopt Rex. Despite her Purple Heart medal the Marine Corps won’t allow Rex to go home with Megan and reassign him a new handler and ship him off to Afghanistan. Megan really struggles with life after the military and after Rex but her father tells her she has to keep going despite how many times she may fail and so she starts actions to get Rex given to her. She doorsteps a U.S. Senator, she starts a petition, she makes news and television appearances and eventually, after Rex is retired, she is allowed to keep him.

This film is an emotional roller-coaster of a movie. Kate Mara as Megan is believable, I had seen some news footage and knew a little of Leavey’s story before the film was given to me, and the bond between Leavey and Rex was astonishing to see grow. The turmoil after Leavey is no longer a Marine is heart-breaking to watch, something I have personal experience with through family and friends in the military, and by the time you see a reunited Leavey and Rex at Yankee Stadium come the end of the film I was crying so hard I had to keep pausing the DVD. Yes the emotion of the love story between no-hoper and aggressive dog that changes both of them through the film probably would have set me off anyway, but it was the way the film was shot that broke me. Director Gabriela Cowperthwaite made a very good looking cinematic film right up to the point of the roadside IED that blows Megan and Rex up, and the following continuing mission and eventual firefight is filmed with such a shaky camera it immerses you in the heat of battle and builds a tension inside of you that by the time you realise they both alive, you are so convinced that something tragic has happened that your heart has already broken. Having known the overwhelming relief of my own father returning from Iraq, by the time Leavey was safe and you found out one her colleagues wasn’t so lucky I was an absolute mess.

Cowperthwaite was not a director I was at all familiar with, although great things have been said of her in our office with a lot of the team fans of her film Blackfish, and whilst I have a small complaint that the film went too fast at the start where we go from Megan the layabout to Corporal in Iraq far too quickly with very little build up, once you are in the war zone the story and the whole look of the film changes and engages you in a very human way to a situation that you can only begin to try and understand. The characters along the way are pretty well fleshed out and cast with known stars that add gravitas to the project; Bradley Whitford as Megan’s father Bob, Edie Falco as her mother Jackie, Will Patton as Jim the stepdad adding a level of intrigue to the family dynamic side of the story and Common as her Gunny, Ramon Rodriguez as her somewhat military boyfriend Morales and the wonderful Geraldine James as the evil villain vet adding a real sense of military to the war and base sections, allow the incredible performance of Kate Mara as Leavey to really shine. Mara is always impressive but to outshine the luminaries she is sharing the screen with was quite the feat and this makes you really sit up and take notice throughout the film which leads you on adventure you didn’t know you wanted. I’m not sure how much of an audience a true story about a war veteran and her dog will garner but I’ll bet it’s not a big enough one. The journey you take as a viewer is so overwhelming and full of sadness, the sense of utter betrayal, and joyful elements that as that viewer you are both exhausted and rewarded in equal measure come the end.

Rex is an emotional story, one not for the faint of heart, but so very worthwhile. A cast of fantastic actors at the top of their game are the driving force of a harrowing journey, but it is a German Shepherd, along with Kate Mara, that deserve all the plaudits. What a wonderfully fulfilling viewing experience.