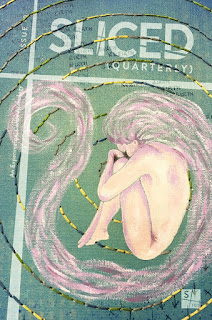 Issue #9 of the Sliced Quarterly experimental comics anthology is now available to download for FREE...

This release begins the third publishing cycle and comes on the back of the successful funding, on Kickstarter, of the second print collection. Continuing to showcase unique comics from fresh and distinct voices in the small press scene, not just in the UK, but from around the world, this issue contains: Sex education, robot fun, a stranded traveller and quirky strip comics. There's also the third part of the series ‘Farquhar’.

And the ‘Small press preview’ continues with a look at the interesting ‘Le Petit Mort’, by Marc Flack.

Have a look at some of the artwork from this issue (including Sarah Harris' beautiful cover art above) and we'll have a review of the issue for you soon. 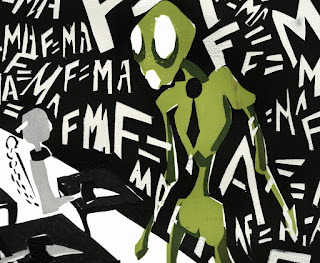 Sliced Quarterly is an experimental comic anthology, with each issue available to download for FREE from the website. They aim to give a home to stories that want to push the boundaries of the comic book narrative and publish ‘slice of life’ stories told in extraordinary ways.

The first collected volume is now available to buy in print from our website - slicedquarterly.bigcartel.com

If you want to send in something for a future anthology, there is an open submissions policy going forward. Guidelines are on their website - slicedquarterly.co.uk/submissions

Ken Reynolds currently lives and works in Ipswich along with his lovely (tolerant) wife and beautiful daughter.

He has lettered for many independent publishers and creators, including upcoming work for Grayhaven Comics, Insane Comics & Arcana. He was proud to be part of the lettering team that completed the 750+ page epic that is ‘The Explorers’ Guild’ by Jon Baird, Kevin Costner and Rick Ross. He also writes the Kickstarter funded comic ‘Cognition’, a supernatural noir adventure story.