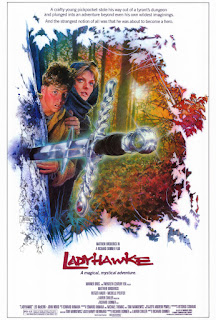 Our small band of Gunters here in The DreamCage universe are reviewing every film mentioned in Ernest Cline's Ready Player One. This week Susan Omand gets cursed for eternity with Ladyhawke...


This is a story of wolf meets bird.

Phillipe Gaston (Matthew Broderick), a thief, has been thrown into the dungeons of Aquila in medieval France, which are said to be inescapable. Sentenced to death, he escapes through the sewers. The evil Bishop of Aquila (John Wood), the harsh ruler of the region, sends his captain of the guard, Marquet (Ken Hutchison), after Gaston to kill him but he is rescued by a mysterious knight, Etienne Navarre (Rutger Hauer) and his hawk, because Navarre wants Gaston to help him enter Aquila so he can kill the Bishop and they set off together. However, Navarre and the hawk mysteriously vanish at night and a beautiful woman (Michelle Pfeiffer) appears in the barn Navarre and Gaston were sheltering in. They are attacked by a peasant but saved by a large black wolf who happens to be in the neighbourhood. In the morning, Navarre and the hawk reappear, but every night, the lady and the wolf again meet with Gaston.

Gaston finds out the story behind this after both Navarre and the hawk are injured in a fight with the Bishop’s guards and Navarre asks Gaston to take the hawk to an old monk named Imperius (Leo McKern). Imperius explains that Navarre was once the captain of the guard in Aquila, and the woman, Isabeau, loved him. She confessed her love to her priest, Imperius himself. Inadvertantly Imperius betrayed the couple to the Bishop, who wanted Isabeau for himself, so the Bishop cursed the lovers with black magic, making Navarre a wolf by night and Isabeau a hawk by day to keep them apart. The curse could only be broken if both Isabeau and Navarre can face the Bishop together in their human forms. The only possibility for the curse to be broken, according to Imperius, is during the solar eclipse, which will occur in a few days.

After convincing Navarre that the plan will work, Imperius and Isabeau bring Navarre into the city at night, caged in his wolf form, as a present for the bishop with Gaston hiding under the cart. As the eclipse begins on the following day Gaston has to sneak into the cathedral through the sewers to unlock the doors. Worrying that the whole enterprise may fail, Navarre tells Imperius to kill the hawk when the bells ring at the end of mass, if Navarre has not returned. Gaston unlocks the doors and Navarre rides his horse right into the cathedral ready to fight for his love...

I had honestly forgotten how much fun this film is. The story itself holds up well, both as a love story and as an action film, with just the right amount of fantasy element, and the effects for their time were not bad, considering they had to deal with “that” transformation scene. The casting too was amazing. I will admit this was not one of Rutger Hauer’s strongest roles, he seems to have difficulty with the “traditional hero” thing and makes a much better bad guy imho, and I do wonder how the film would have turned out if the original choice for lead, Kurt Russell, had gone ahead with it. But, hey, it's Rutger Hauer, he gets forgiven for anything. However the rest of the cast are exceptional, with Michelle Pfieffer balancing ethereal beauty with a strong character, John Wood chewing scenery as the Bishop, the marvellous Leo McKern adding the right amount of sentimentality and Matthew Broderick topping it up with the necessary babbling light humour to what could have become quite a slush-fest of a movie if it took itself too seriously. But this was never going to happen with the assured hand of Richard Donner at the helm. With The Omen and Superman behind him and the next two films after Ladyhawke being The Goonies and Lethal Weapon, he had the breadth of genre to ensure the film doesn’t get bogged down.

There is however one thing that lets this film down and that’s the soundtrack. What were they thinking?! I mean, mediaeval French villages with a central story of love and magic aren’t really conjured up by a theme that reminds me far too much of MacGyver.