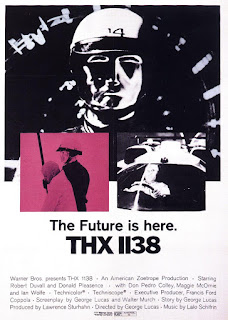 Our small band of Gunters here in The DreamCage universe are reviewing every film mentioned in Ernest Cline's Ready Player One. This week Nate McKenzie takes a look at George Lucas' THX 1138...

What am I to her, she to me? Nothing.

In reviewing films, it is important to have a knowledge of the history of film. Not necessarily the inner workings of how a film is created, but the genealogy of cinematic ancestors. The inspirations a director calls on, if only subconsciously, that bleed into their work and emit tiny beacons of light to film connoisseurs.

After a film has existed for some time, understanding its inspirations is less important than appreciating the films that it subsequently inspired.

George Lucas' THX 1138 wasn't the first of its kind. Metropolis existed forty-three years prior and multiple films in the same vein were born hence. But the significance of THX 1138 on films of the Science Fiction genre that followed are undeniable.

Robert Duvall plays THX 1138 in a future society that prescribes obedience via drugs and uses letter/number designations instead of names, feelings are outlawed, all for the greater good, "by the masses, for the masses". The world is dictated entirely by economics. That which is efficient is approved and good; that which does not fit the budget is discarded. In this world, THX falls for his roommate, LUH 3417 (Maggie McOmie), and together they cease their medications. Combined with the machinations triggered by fellow citizen, SEN 5241 -played by the great Donald Pleasence- they begin to unravel the world around, and within, themselves.

What strikes me the most about this film is the predictions that George Lucas presents for what the future may hold. At least, the future of now as seen from the year 1971. He showcases an understanding of how our world works and the direction in which it was trending with a telescopic vision. The effect of Aldous Huxley's Brave New World (1932) on Lucas' work is apparent; but Lucas doesn't pay homage or directly reference anything in the past that may have influenced him. The result is a wholly original work, despite being a pastiche.

As good as Lucas is at building stories and worlds and characters that you quickly empathize with (or despise), an underrated facet of his abilities as a filmmaker is his skill with action sequences. The car chase scene towards the end of THX 1138 is one that stands up against any from the most recent decades. Not necessarily because of its technical notes (it's not a complicated sequence) but rather because of the fluidity and sheen of the scenes, along with the deft choice to use Lola T-70 Mark IIIs as the "futuristic" vehicles, despite the Lola being a real car used in British sports car racing. I've always found it disappointing that the Lola T-70 didn't become an iconic movie vehicle alongside the likes of Doc Brown's DeLorean, Bullitt's Shelby GT500, or John Milner's '32 Ford Coupe.

What makes THX 1138 special is the same thing that makes it a staple within the Science Fiction and Dystopian genres. The stylized world that George Lucas creates within the film is both beautiful and bleak, like a graveyard at sunrise; invigorating and foreboding, like that same graveyard at sunset.

To wit, the film ends on a shot reminiscent of an iconic Tatooine scene in Star Wars IV: A New Hope, with THX emblazoned in silhouette against the backdrop of a large orange sun. A fitting finale to a two hour dive into a world that seems anxiously familiar in our modern world - a world that once-upon-a-time, was a future that people both anticipated and feared.