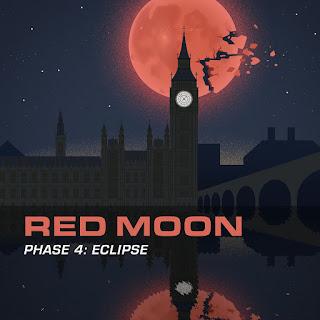 "Luckily, this was a rainy day I had prepared for..."

Eddie Sloper is on the run after the events of last month’s episode. He holes up under an assumed name in an anonymous B & B in Croydon after getting in touch with his Russian friend to find out more about “the new American cleaner.” Meanwhile Dr Susan Madison finishes giving her evidence of glitches on the Eagle 1 mainframe to Mrs Jones at Space Command. On the way back to her car, Madison stops to phone her colleague Benji at Jodrell Bank to update him and notices that she is being “watched by a creep”. But that is soon the least of her problems as she gets trapped in an alleyway at gunpoint…

This is the episode where the disparate stories of Dr Madison and Eddie Sloper finally converge. Although it was just as action-packed as the other episodes in the series so far, I felt that this time the main characters of Sloper (Philip Bulcock) and Madison (Yasmine Holness-Dove) suddenly came to the fore, where they hadn’t really for me in previous episodes, to drive the story on almost like it was a two-hander episode. And drive it they did as it also felt a much meatier episode to me, with lots explained and more questions asked as their revelations added smoothly to the plot.

There was also a very believable bond between the characters as they started to work together to thwart the common enemy and I think this is down to both the dialogue itself, expertly written by Robert Valentine, and a strong chemistry between the actors. I guess “chemistry” is probably the wrong word as that implies intimacy and there is nothing romantic or sexual in their characters’ connection, I mean more the fact that they make a very convincing team, nothing jars between them.

The only slight niggle for me is that, for me, the alternative history aspect of the story seems to have been put on the back burner a bit. It’s maybe been implied rather than explicitly mentioned but I felt a bit like this episode could have been set in the real world and it lost some context. However the soundscaping ensures that the time-frame remains late 70’s era-specific, with good use of the old dial telephone and phone boxes (although the pedant in me is quibbling about the length of the phone number dialled for 1979 to get from Richmond to Jodrell Bank but that is by the way.)

To my mind though this has been the best episode of the series so far as we enter the second half of the story and things start to come together.

You can stream Phase I of Red Moon FREE on the Wireless Theatre Company website where you can also buy Episode Three for only £1.49 and find the rest of the series as the episodes are released.