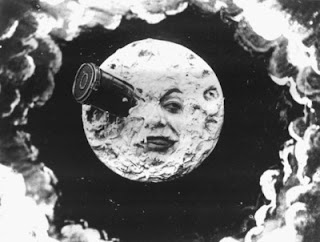 The autobiography of Georges Méliès, the father of cinema, has been discovered by a filmmaker in London and is now being re-published thanks to a Kickstarter campaign after being unavailable for 73 years...

Eighty one years ago, at the age of 77, Georges Méliès - the father of narrative and fantastical film - hand-wrote his autobiography. It has been completely unavailable since 1945, has never been translated into English until now and is thought to be one of the great unseen texts of cinema history.

Georges Méliès (1861-1938) is arguably the most important figure in narrative cinema history. He pioneered the Sci-fi, Fantasy and Horror genres and was the first to create and use special effects, with Charlie Chaplin calling him "the alchemist of light." Many of his concepts are still used today and, although his work is over 100 years old, he gave cinema its first iconic sci-fi image - the moon with a rocket in his eye. Martin Scorsese's 2011 film 'Hugo' was a homage to Méliès.

"He invented everything, basically, he invented it all." - Martin Scorsese

Jon Spira, a documentary filmmaker who works with the British Film Institute and directed recent Star Wars documentary Elstree 1976, discovered a facsimile of Méliès's handwritten manuscript in the collection of an antique bookseller in rural France, had it translated into English for the very first time and is now publishing the memoir in a brand new hardback edition.

Says Spira: "This is a hugely significant, long-forgotten text. A firsthand account of the birth of cinema from a man who was not only there but was its greatest innovator and artist. It deserves to be read."

Film fans and history buffs can pre-order their copies of the book or the deluxe wooden box set now on Spira's Kickstarter campaign at: http://kck.st/2GkTttH